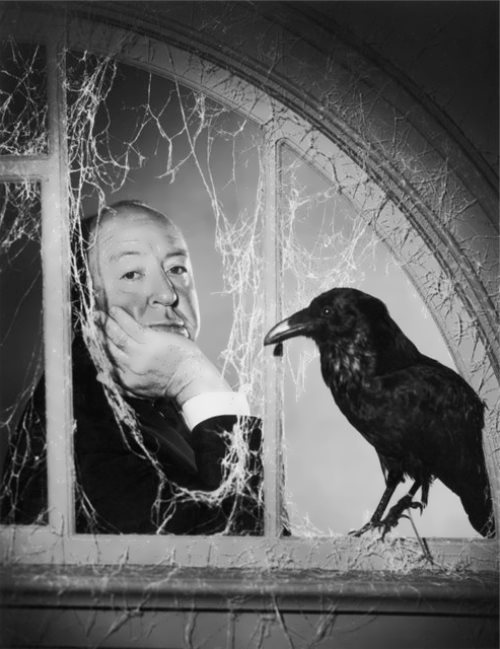 Alfred Hitchcock: The MASTER of SUSPENSE
“… and remember, the next scream you hear maybe your own!”

LET’S IMAGINE A FILM WITH THREE MEN SITTING IN A ROOM. There is a bomb hidden in the room, but the men don’t know about it. Neither does the audience. The men are engaged in small talk, but no one is really interested. Then the bomb explodes. The audience is surprised, but there has been no suspense.
Now let’s change the situation a little. This time, the audience knows that the bomb is ready to go off, but the men in the film don’t. Now the small talk has a dramatic effect. It becomes unbearable. The audience wants the men to get out of the room, but they don’t go. Someone makes a move to leave, and the audience makes a sigh of relief. But someone delays, and the tension builds again.
One of the greatest masters of suspense was Alfred Hitchcock (1899-1980). He knew how to keep the viewers on the edge of their seats and developed his skill to the point of high art.

THE AUDIENCE MUST SUFFER
“Always make the audience suffer as much as possible,” Hitchcock liked to say.
If you have seen Psycho, you know what suffering is. The film opens with a young girl’s arrival at a small motel. You feel at once that the girl has picked the wrong place to spend the night. The motel is run by a strange young man and his crotchety old mother…
Almost immediately the girl is stabbed to death in her cheap motel shower. You are terrified, but that’s only the beginning. Though the film becomes less violent as the plot develops, you get more and more frightened. Hitchcock keeps you in suspense till the very end. The nerve-racking music adds to the effect. 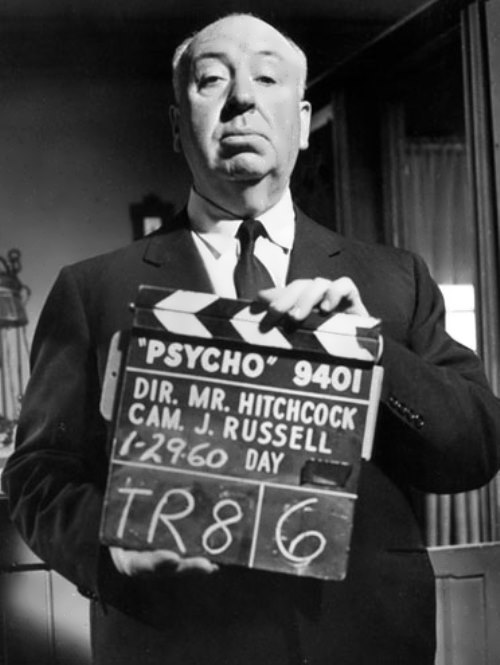 It is said that no matter how many times you have seen Psycho, you always experience fear and suspense.

THE AUDIENCE SHOULD KNOW MORE THAN THE ACTORS
Hitchcock uses various tricks to create the atmosphere of suspense in his films, but the main thing, according to his theory, is that the audience knows more than the actors.
You know that the actor is in danger, you would like to step in and help him, but you cannot! All you can do is suffer in silence and hope for the best.

DANGER CAN BE FOUND EVERYWHERE
You have probably seen The Birds, one of Hitchcock’s best films. It is based on a short story by Daphne Du Maurier, but Hitchcock adds horror of his own. The action takes place in sunny California, but the bright daylight soon becomes dangerous. For some unexplained reason, all the birds begin to attack people. These small peaceful creatures suddenly become killers. Beaks and claws become deadly weapons.
One of the most chilling scenes in the film is also one of the quietest. Four people are sitting in a closed room. They know the birds are outside, ready to attack. The child, the young man, the young woman, and the older woman look at each other with terror in their eyes. Nothing happens. There is no sound. Hitchcock spins out the silence for a long time. Then a shutter blows open. The man goes to close it, and his arm is bloodied by the birds waiting outside. This little scene sends shivers down your spine and prepares you for worse to come. 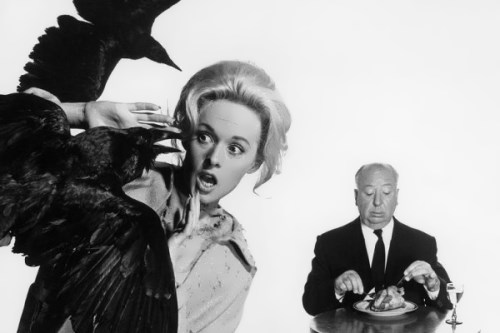 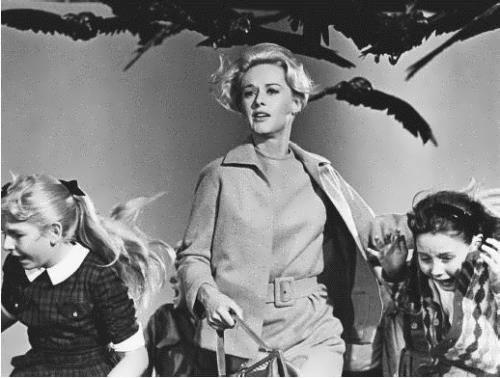 HORROR RESIDES IN EVERYDAY LIFE
Danger can be found everywhere, but real horror, Hitchcock believes, resides in everyday life. If a murder is committed in a lonely house on a hilltop, you feel a certain amount of excitement. But you are not really involved. “Those are only actors” you say, as you open another bag of popcorn. But put the murder into an everyday setting and the situation changes. “That could be me!” you think.
In Rear Window, the action takes place in an ordinary-looking apartment house. Jimmy Stewart, the hero, has broken his leg and cannot move around. He spends his time looking out into the courtyard and at other apartments. One day, he sees a murder committed in one of the apartments. The film deals with his efforts to tell what he has seen and to have the murderer caught. At first no one believes him, but the audience knows better. The climax of the film comes when the murderer enters Stewart’s apartment to kill him. You realize that Stewart is in great danger, even before he does. Stewart cannot move around. He is trapped. Hitchcock spins out the suspense until the audience is on edge. Then comes the swift climax, and the film is over. The murderer is captured — and Stewart breaks his other leg! ‘Wow!’ you exclaim. ‘That was exciting!’
We all like to be scared – safely! 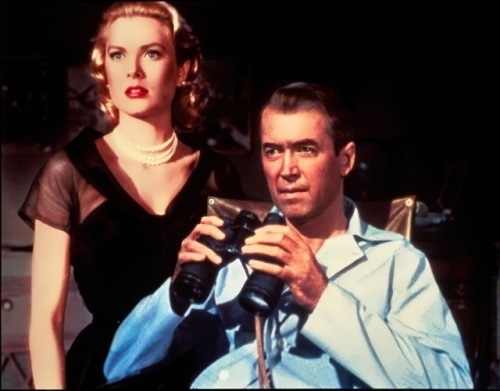 Some facts about Alfred Hitchcock
Hitchcock loved a practical joke. Once he got into an elevator and started telling an exciting anecdote in a loud voice. Just before the end of the story, he got off the elevator. Everyone, wanted to shout out, ‘Finish that story!’ But Hitchcock strolled calmly away.

You can see Alfred Hitchcock in nearly all his films (in small silent roles, of course). Sometimes he is just a passerby or passenger on a bus, but his fans always notice him!

Hitchcock was a family man. He liked to be at home with his books and his pictures, his wife, his dog, his daughter and her family, and a tiny circle of close friends. 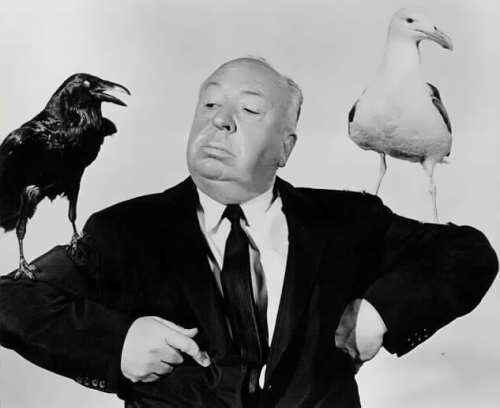 1919 Hitchcock begins his film-making career writing titles for the Famous Players — Lasky Company (now Paramount Pictures).
1925 Hitchcock directs his first film The Pleasure Garden.
1926 Hitchcock makes his first suspense film The Lodger, the story of a family who mistakenly suspect their roomer to be Jack the Ripper.
1930s Hitchcock directs such classic suspense films as The Man Who Knew Too Much, The Thirty-nine Steps, Sabotage, and The Lady Vanishes. The Thirty-nine Steps, an exciting chase film, wins an award for the best directed picture. Hitchcock is becoming world-famous.
1939 Hitchcock moves to America.
1940 He makes his first American picture, Rebecca, based on a novel by Daphne Du Maurier. It wins an award as the best picture of the year. Hitchcock turns out success after success.
1940s In Hollywood Hitchcock usually makes a film a year. Among the important films are Suspicion, Shadow of a Doubt, Lifeboat, and Rope.
1950s Hitchcock makes several big-budget suspense films starring some of the leading actors and actresses of Hollywood. These films include Strangers on a Train, Dial M for Murder, Rear Window, To Catch a Thief, The Man Who Knew Too Much (a remake of the 1934 film), Vertigo, and North by Northwest.
1955 Hitchcock enters television with his famous series Hitchcock Presents.Television, Hitchcock jokes, has brought murder into the home — where it belongs.
1960s Hitchcock creates such brilliant thrillers as Psycho, The Birds, and Marnie.
1971 Hitchcock returns to England.
1970s Hitchcock makes his last films, Frenzy and Family Plot.
1979 A year before his death in 1980 Hitchcock receives the American Film Institute’s Life Achievement Award. This year he is also knighted by Queen Elizabeth II. 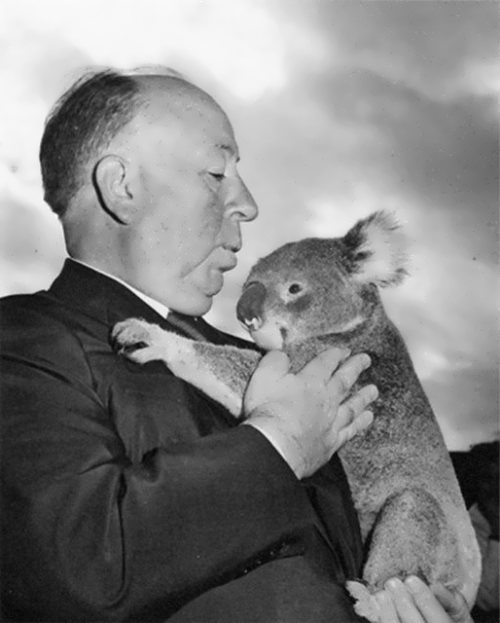 Vertigo is probably one of the most discussed works by Alfred Hitchcock. It should be seen more than once to be understood. It’s a double-identity thriller that has several classic Hitchcock tricks. Hitchcock makes the audience share the main character’s confusions and uncertainties. James Stewart, as Scottie, is baffled by the identity of the girl he loves. Who is Madeleine? Who is Judy? Are they really the same girl? The audience suffers with him. Madeleine falls to her death from a belltower. At this point Hitchcock seems to take the audience into the brain of his main character. Scottie suffers from vertigo, or dizziness caused by a fear of height. By clever camera work and props, the audience is made to experience the vertigo that Scottie feels. They share Scottie’s terror and shock at the horrifying death. The tension builds almost to the breaking point. 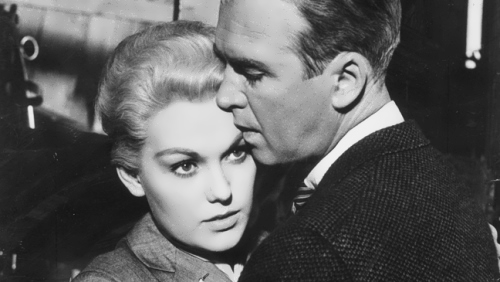 FOLLOW-UP ACTIVITIES
Are the following sentences True or False?
1. Alfred Hitchcock has his own theory of how suspense should be built.
2. Hitchcock believes that the audience should suffer as much as possible.
3. Hitchcock makes the audience suffer by making his films more and more violent as the plot develops.
4. According to Hitchcock, the audience should never know more than the actors.
5. If a murder is committed in a lonely house on a hilltop rather than in an ordinary apartment house, the audience will be more frightened.
6. Music, too, can help create the atmosphere of suspense.
7. The action of Psycho takes place in a large expensive hotel.
8. In Vertigo the hero suffers from dizziness.
9. Hitchcock used Daphne Du Maurier’s stories only once.
10. Hitchcock began his film-making career in Hollywood.
11. Rear Window has a happy ending.
12. We can see Alfred Hitchcock in small silent parts in most of his films.