An Englishman’s Home is His Castle 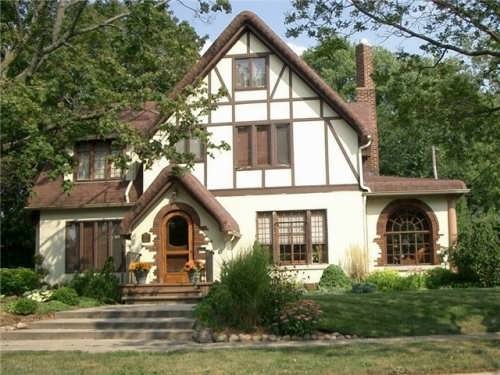 Everyone in Britain dreams of living in a detached house, which means a separate building. It is usually built of brick and slate. A detached house is of «non-classical» shape with a lot of little corners, which make the house very cosy. In front of the house there’s always a beautiful garden with smooth lawn. The garage is hidden away so it doesn’t spoil the rural feeling.
Every Englishman wants privacy. And a large, detached house not only ensures privacy, but it’s also a status symbol. Such a house is a dream for most people. But even a small house with a garden is very dear to the hearts of many people in Britain.

Most people don’t like blocks of flats, be-cause they provide the least amount of privacy. Flats are usually much cheaper. (In fact, they’re the cheapest kind of home.) People who live in them cannot afford to have a house of their own. Their dislike of living in flats is very strong. In 1950s, for example, millions of poor people lived in old, cold, uncomfortable houses of the 19th century, with no bathroom. But when they were given new blocks of flats to live in, with central heating and bathrooms, more comfortable and cosy they hated their new homes. They felt lonely without their gardens and neighbours.
In Britain these «tower blocks» (or «high- rise blocks») were a complete failure, because they didn’t suit British attitudes; while in other countries people are very happy in modern flats. Nowadays only 40% of the population live in high-rises.
Law and custom in Britain support a clear separation between what is public and what is private. To emphasize this division, people prefer to live in a house, set back from the road. This way they can have a garden in front of the house, which separates them from the world. This area may not be very big, but it allows people to have a low fence or a hedge round it. Such a fence announces that here the private property begins.
Flats don’t give people enough privacy. Not having a separate entrance to the outside world doesn’t suit British tastes. People like to choose the colour of their own front door or window frames. Besides, they can have a small garden of their own in front of the house, even if the outside territory is very small. English people usually have flowerbeds with paths in between, or just patches of grass to express their individuality.
British houses are thought to be very cold, maybe the coldest in Europe. But it is not so. About 3/4 of houses now have central heating. The most important thing for British people is to feel cosy — that is to create a warm atmosphere (even if it’s not warm in the house). In Britain many people have a great desire to have a «real fire». A fireplace is a traditional symbol of warmth. Nowadays, it may be an imitation of open fire with plastic coal. Most older houses have two living rooms. It allows the front room to be used for formal visits while the family spend their time in the back room, hidden from public view. If there is one living room in the house, then there is a hall into which the front door opens. Private houses usually have the back door for family or close friends.
In spite of peoples’ great desire to have a house of their own they’re not so much attached to the house itself. The house can be easily sold, if necessary and if the price is attractive. Most houses are sold on the open market by the «property developers» (they are private companies).
The desire to have a private house is great, but house prices are very high. About 70% of all the houses are occupied by their owners. Usually people borrow 80% of the price and then pay the money back month by month. Normally they pay the money back over the period of 20 — 25 years.

EXERCISES
I. Answer the questions.
1. What does a «detached house» mean?
2. Why don’t English people like blocks of flats?
3. Why is it so important for English people to have a garden in front of the house?
4. How can an Englishman express his individuality?
5. What is a traditional symbol of a cosy home in Britain?
6. Why do British people tend to have two living rooms?