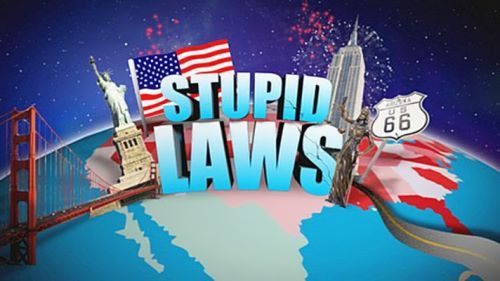 It’s very important, in a civilized country, to have law and order. But some of the laws are really dumb! Here’s a collection of real laws. Many of them were written a very long time ago, but were never repealed.
In Lancashire, UK, it’s against the law to hang male and female underwear on the same line.
In New York, you have to buy a license to hang clothes on a clothesline.
Duelling in Paraguay is legal as long as both participants are registered blood donors.
In Malaysia it’s against the law to dance on the backs of turtles.
In Madagascar it’s illegal for pregnant women to wear hats.

In Waterloo, Nebraska, USA, it’s illegal for a barber to eat onions between 7 am and 7 pm.
It is illegal for a driver to wear a blindfold while driving a car in Alabama.
In Michigan, USA, alligators may not be tied to fire hydrants.
It is illegal to enter the Houses of Parliament in a suit of armor in England.
It is forbidden to park flying saucers in the vineyards throughout France.
It is illegal to name a pig Napoleon in France.
It is illegal to rescue a drowning person in China, because it is his fate.
In South Korea traffic police officers are obliged to report any bribes they received from drivers.
In Thailand stepping on any coins and banknotes of the national currency is an offense. If you throw chewing gum on the sidewalk you will have to pay US $ 600. If you do not have money you can go to jail.
In Calgary it is illegal to light fireworks and play snowballs without City Council permission.
In Los Angeles it is forbidden to lick toads. The toads secrete a substance that some licks in order to achieve the effect of drug exposure.
Everyone knows that pi is equal to 3.1415, but in Indiana pi is equal to 4.
In Oklahoma dogs must have a permit signed by the mayor in order to gather in groups of three or more individuals within private property.
In Pennsylvania if a horse refuses to pass a car on the road, the car owner is obliged to dismantle it and hide the parts in the bushes.
In Washington it is illegal to pretend that your parents are rich.
In Rumford (Maine) residents are prohibited bite homeowners.
In Cleveland (Ohio) the law prohibits to catch mice without a hunting license.
In Oxford (Ohio) it is illegal for women to undress in front of a portrait of the man.
In Klamath Falls (Oregon) it is forbidden to whistle underwater and to roller-skate in public toilets.
In Racine (Wisconsin) it is forbidden to wake sleeping firemen.
In Sainte-Croix (Wisconsin) women are prohibited from wearing red clothes in public.

In France
— Between the hours of 8AM and 8PM, 70% of music on the radio must be by French artists.
— It is illegal to kiss on railways in France.
— No pig may be addressed as Napoleon by its owner.
— In Antibes it is illegal to take photos of police officers or police vehicles, even if they are just in the background.
— In Paris an ashtray is considered to be a deadly weapon.

In England
— A bed may not be hung out of a window.
— It is illegal for a lady to eat chocolates on a public conveyance.
— It is illegal for a Member of Parliament to enter the House of Commons wearing a full suit of armour.
— In Chester you can only shoot a Welsh person with a bow and arrow inside the city walls and after midnight.
— In Hereford you may not shoot a Welsh person on Sunday with a longbow in the Cathedral Close.
— In Liverpool it is illegal for a woman to be topless in public except as a clerk in a tropical fish store.
— In York excluding Sundays, it is perfectly legal to shoot a Scotsman with a bow and arrow.