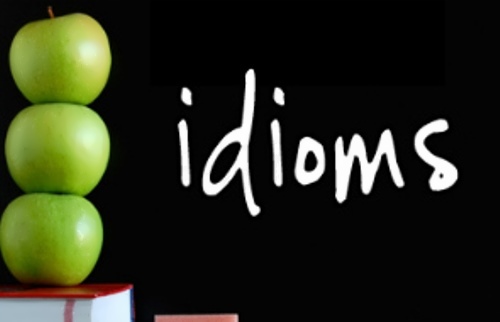 A big fish in a small pond: a person seen as important, but within a small environment
A finger in every pie: be involved in or influence many different activities
A foot in the door: do a small thing to create an opportunity in the future
A card up your sleeve: have a reserve plan or secret advantage
A cock and bull story: a story or explanation which is obviously untrue
A cold call: an unexpected call or visit
A hard nut to crack: a difficult problem to solve
A hatchet job: making strong and unfair criticism of something

A finger on the pulse: keep up to date with recent developments
A fish out of water: feel awkward because you are not familiar with a situation
A fly on the wall: an unnoticed observer of another situation
A glass ceiling: unacknowledged limitation on promotion at work
A knee-jerk reaction: an instinctive response to something
A moveable feast: an event where the time and/or date can be changed
A piece of cake: something easily achieved
A shot in the arm: give encouragement/boost morale
A spanner in the works: prevent something being achieved
A square peg in a round hole: a person in a situation unsuited to their abilities or character
A sting in the tail: an unpleasant end to something that began well
A storm in a teacup: an overreaction to something unimportant
A thorn in someone’s side: a source of continuous annoyance or trouble
An uphill struggle: a difficult situation because something/someone is causing you problems
Add fuel to the fire: make an argument or bad situation worse
At the sharp end: the most challenging part of an activity

Back to square one: start again from the beginning
Bang your head against a brick wall: keep trying to solve a problem and being unsuccessful
Bend over backwards: make a special effort to do something
Bend someone’s ear: question someone in detail about something
Between a rock and a hard place: having to make a choice between two unpleasant options
Bite someone’s head off: react angrily to someone
Bite the bullet: make yourself do or accept something difficult or unpleasant
Bite your tongue: stop yourself saying something inappropriate
Blow the whistle: report something negative so that it can be stopped
Break the ice: help people feel more relaxed with each other
Breathe down someone’s neck: irritate someone by checking constantly what they are doing
Bury your head in the sand: refuse to think about or deal with a situation

Cut corners: do things the easiest, quickest or cheapest way

Dig your heels in: be stubborn/refuse to give in
Doesn’t hold water: something that can be proved to be wrong
Drag your heels: deal with something slowly, because you don’t want to do it
Draw a line under it: finish talking about a topic and not refer to it again
Draw the line: put a limit on something because you think it is wrong
Drive someone up the wall: make someone very angry or irritated

Eat humble pie: admit you are wrong and apologize
Eat your words: admit that something you said was wrong

Feather your (own) nest: make money at the expense of other people
Fly by the seat of your pants: make decisions as you go along, without a plan
From the horse’s mouth: information obtained from the person directly concerned
From the frying pan into the fire: move from a bad situation to a worse one

Get to grips with something: start to deal with a difficult job or situation
Get your wires crossed: misunderstand something
Go down like a lead balloon: a comment or suggestion which is not received well
Go overboard: too eager, do more than is necessary
Grasp the nettle: take immediate action to deal with something difficult

Have a bee in your bonnet: preoccupied or obsessed with a particular idea
Have a bone to pick: discuss something which has annoyed you
Have/get your ducks in a row: have your priorities in the right order
Have egg on your face: be embarrassed because of something stupid you have done
Heads will roll: people will be punished for a mistake made
Hear something on the grapevine: discover something by rumour or unofficial source
Hit the buffers: a plan which fails to develop, or is stopped
Hit the jackpot: have an unexpected success, often financial
Hit the nail on the head: describe exactly what is causing a problem or situation
Hot under the collar: angry, resentful or tense

In at the deep end: facing a problem without enough experience
In hot water: in trouble or in a difficult situation
In the driving seat: in control of something
In the hot seat: be the focus of attention
In the loop: be kept fully informed about developments
Iron/smooth something out: resolve minor difficulties
It’s in the bag: something that will definitely be achieved

Jump through hoops: do something difficult to achieve your objectives

Keep something under wraps: keep something secret or confidential
Keep your feet on the ground: retain your personality, despite fame or success
Keep your hair on: stay calm and patient

Lay your cards on the table: be completely honest about your intentions
Left high and dry: put in a difficult situation
Let sleeping dogs lie: warn someone not to talk about a negative situation from the past
Let the cat out of the bag: carelessly reveal secret information
Lose the thread: be unable to follow what is being said or done

Make a mountain out of a molehill: make a minor difficulty seem like a major one
Money for old rope: an easy way of acquiring money without much effort
Move the goalposts: change the rules unfairly

Nail/pin someone down: make another person deal with an issue
Nip it in the bud: stop a problem at an early stage

Off the hook: escape from a difficult situation or problem
Off the record: saying something you do not want to be publicly known
On the tip of your tongue: almost but not quite able to remember something
Open a can of worms: reveal something which will cause trouble or embarrassment

Paint yourself into a corner: do something which puts you in an awkward situation
Pie in the sky: something you hope will be achieved, but is unlikely to be
Pick someone’s brains: ask for advice from someone more knowledgeable
Play/keep your cards close to your chest: not tell anyone what your plans are
Pour/throw cold water over something: be critical of or negative about something
Pull strings: use your influence to someone’s advantage
Pull the plug: put a stop to something
Pull the wool over someone’s eyes: deceive someone to prevent them knowing the truth
Push the envelope: extend the limits of performance
Put all your eggs in one basket: risk losing everything by limiting your options
Put out feelers: make informal enquiries to discover people’s opinions
Put the cart before the horse: have your priorities the wrong way round
Put your foot in it: accidentally say or do something which causes upset or embarrassment

Rise to the bait: react to something in the way that another person wanted
Ruffle someone’s feathers: make someone angry or annoyed
Run it up the flagpole: tell people about an idea to get their opinion

Scrape the barrel: use something of poor quality because there is no choice
Shoot your mouth off: talk too much or indiscreetly
Sing from the same song sheet: present a united front
Skate on thin ice: take a big risk
Spill the beans: reveal a secret or the truth about something
Step out of line: behave inappropriately
Stick your neck out: give an opinion which may not be popular
Stick/poke your nose in: show too much interest in something that does not involve you
Stick to your guns: refuse to change or modify your ideas
Strike while the iron is hot: act quickly on a good opportunity
Swallow a bitter pill: accept an unpleasant or painful necessity
Sweep something under the carpet: hide a problem in the hope that it will be forgotten

Take the floor: when someone speaks at a conference or meeting
Take a leaf out of someone’s book: copy someone’s good example
The ball is in someone’s court: making someone else the first to take responsibility
The balloon’s gone up: something becomes very serious or unpleasant
The gloves are off: something will be resolved in an unpleasant way
The last straw: a final, extra difficulty, which makes a situation impossible
The penny has dropped: eventually understand something
The thin end of the wedge: the start of a bigger, more harmful development
The wrong end of the stick: misunderstand a situation
Throw the baby out with the bathwater: get rid of good as well as bad parts of something
Tie yourself in knots: become very confused when you try to explain something
Two bites of/at the cherry: have a second opportunity to do something
Turn up the heat: intensify pressure on a person or situation

Water under the bridge: past event which is no longer worth considering
Water off a duck’s back: criticism which has no effect on somebody
Wet behind the ears: someone with a lack of experience
Wide of the mark: be wrong about something