« Word Games
Unicorn in the Garden » 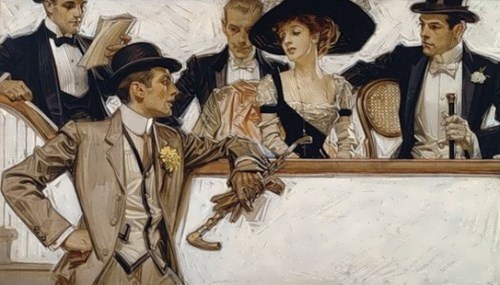 NO ONE HAS A RECIPE FOR LAUGHTER but we all recognise situations, texts or pictures which cause it. No one actually knows what humour is but many people may use it with uproarious effect and we may enjoy it. Clowns, professional entertainers, actors, writers earn their bread with it.
We all think that we have «humour” or a “sense of humour”. “Poor thing,” we say sometimes, ‘he has no sense of humour.» As a wise man once said, «Men will confess to treason, murder, arson, false teeth or a wig. How many of them will own up to a lack of humour?”
English dictionaries define humour as the quality of anything that is or seems to be funny or appeals to the comic sense or provokes laughter and the ability to understand and enjoy it.

Do you know the difference between humour and wit? Wit is one of the synonyms of wisdom, intelligence. It also suggests intellectual brilliance and verbal deftness, as in the epigram. A wit also denotes a clever conversationalist. Wit is commonly verbal, while humour need not be.
What are the things that we usually tell jokes about? In Russia, jokes are about famous people (Vassiliy Chapayev has almost become a myth!), politicians of the past and present, popular characters from the movies (Stierlitz and Muller), Radio of Armenia, mothers-in-law, … You may continue the list yourself.
In Great Britain, jokes are about landladies, schoolboys, secretaries, Scotsmen, Irishmen…
The commonest jokes in any language must be about the happenings of the time. These are called “topical” jokes. The trouble with these jokes is that they are only jokes at the time. When you have to explain a joke or remind people of the happenings that caused it, you kill the laughter. Probably you, too, tried to translate some of our popular «anecdotes” into English or some other language and were surprised that the response was far from what you had expected.
But there is another type of humour, found in “slapstick» comedy, which is used by clowns in the circus and sometimes by actors like Charlie Chaplin or Laurel and Hardy in silent films. It is a friendly type of violence where actors attack each other with buckets of water or cream cakes, going back to the Italian folk comedy of the 16th century called commedia dell’arte. This form of theatre with its visual humour, practical jokes and great freedom for the actors to improvise within the script has become international and is still popular in England as a winter show (pantomime). «Slapstick” humour, also called «banana-skin” humour, is appealing to any audience. (Do you know why?) How could we otherwise explain the phenomenon of Charlie Chaplin, a masterly humorist with a world-wide audience?
I hope a small collection of jokes and an anecdote (short amusing story about real person) below will make you smile or laugh:

FATHER: Well, Tracy, what did you learn on your first day at school?
TRACEY: Not enough, I have to go back tomorrow.
* * *
TEACHER: What is the most common expression in school?
BOY: I don’t know.
TEACHER: Correct.
* * *
PROFESSOR: Hawkins, what is a synonym?
STUDENT: It’s a word you use in place of another one when you cannot spell the other one.
* * *
Bernard Shaw got an invitation to see a new play. After the performance the director asked the writer: «What is the difference between comedy, drama and tragedy?”
“Young man,” answered Bernard Shaw, «the fact that you do not know the difference between comedy, drama and tragedy is for me, personally, comedy, for the spectators — drama, and for you — tragedy.”

ENGLISHNESS IN HUMOUR
The name of John B. Priestley (1894—1984), a British writer who took a humorous view of English life in his novels and plays, may be familiar to you because his plays An Inspector Calls, Time and the Conways, Dangerous Corner have been staged in Russian theatres. But Priestley also wrote about English humour in two of his books: English Humour (1925) and The English (1975). 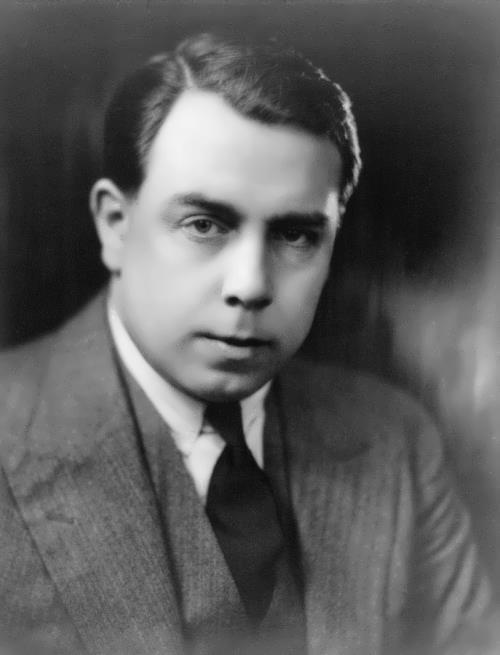 Priestly states that the English are different from other Wrest Europeans in that they depend more upon instinct and intuition than other West Europeans do and it is this “Englishness” that “develops and sustains a keen sense of the ridiculous.” Both in life and in literature the English have a great deal of affection which gives English humorists “tolerance and a smiling acceptance of all manner of people.” Not being childish, Priestly says, English humour has some roots in childhood, and in great masters of it in literature the links with childhood remain. In The English, he is concerned with essentially English characteristics and therefore excludes from his survey of outstanding humorous authors such famous Irish writers as Swift, Sheridan, Oscar Wilde and G.B. Shaw.
The following qualities are necessary in order to become a humorist: “a needle eye for the incongruities, the pretensions, the inconsistencies, all the idiocies and Antics of this life” and, on the other hand, “an unusual quickness and warmth of feeling, an instant affection for all that is loveable.”
The combination of these qualities is found, Priestey believes, in a great many English humorists, but none of them can compare with Shakespeare, Laurence Sterne and Charles Dickens. The quotations below will give you an idea of what makes these three the greatest masters of English humour:
“As for Shakespeare there is more show of affection, a better understanding of it even in two or three of his plays than (if we except Chekhov) in the total works of all modern masters of drama.”
“In spite of the silly tricks he (Stern) and his printer play in it (Tristram Shandy, Stern’s famous novel), … it is a work of a humorous genius. As an entirely original humorous vision of this life I doubt if any writer in any literature has beaten it at its whimsical game.” «What I said earlier about the humorist combining the needle eye and the instant affection fits Sterne perfectly.”
«… for sheer energy, inventiveness, fecundity in humour, Dickens cannot be beaten, and for every one of Shakespeare’s comic characters he offers us at least twenty.» “Can we wonder if Dickens conquered the world as no English writer since Shakespeare has ever done?”
Dickens who came close to writing sheet jovial nonsense at times was outdone in this by other Victorians, among whom Priestley mention’s Edward Lear (1812—99), who made the form of limerick popular, and Lewis Carrol (1832—98), who wrote two well-known children’s stories Alice’ Adventures in Wonderland and Through the Looking Glass.
The form of the limerick is always the same — five lines, three long and two short. An example of a limerick is:

There was a young man from Benga
Who went to a fancy-dress ball,
He decided, for fun,
To dress as a bun,
But a dog ate him up in the ball.

From E. Lear’s limericks I’ve chosen the one about a young lady from Russia. If you like it, try writing a limerick yourself. The form is actually not so difficult!

There was a young lady from Russia,
Who screamed so that, no one could hush her.
Her screams were extreme.
No one heard such a scream
As was screamed by that Lady of Russia. 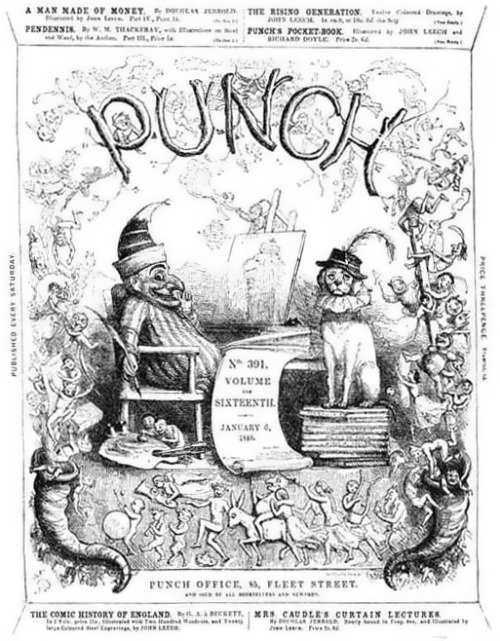 Punch is a British illustrated magazine known for its humorous articles and literary criticism.
The idea of starring a comic paper in London similar to Paris Charivari first occurred to Ebenezer Lanells, draughtsman and wood-engraver, who together with several of his friends became the first editor of the paper (1841). Richard Doyle made the most famous drawing for the cover (in 1849) which was replaced by a full-colour design only in 1956. The original title was Punch or The London Charivari and it was a strongly radical paper, which gradually became more and more respectable until it became conservative. There was always wit with the humorous situations in the Punch jokes. The Punch figure and the dog, Toby, usually appeared in the design.
The title of the paper comes from a puppet-show drama introduced into England from the Continent towards the end of the 17th century. The character of Pulchinello was invented by Silvio Fiorillo, a comedian, about the year 1600, for the Neapolitan impromptu comedies to imitate the peasants of Acerra, a town near Naples.
The main outline of the drama is as follows.
Punch is a hump-backed, hook nosed creature, full of optimism, violent and cunning. In a fit of anger he kills his child. His wife Judy, discovering the murder, attacks him with a bludgeon, but he snatches the weapon from her and kills her. The dog, Toby, seizes him by the nose, and he kills it, too. He is visited by a doctor when he is ill, and he kills him. He is arrested and sentenced to death, but he makes the hangman put his own head in the noose and hangs him. Finally, he is visited by the devil whom he also defeats.
The jokes below has been borrowed from a 1912 copy of Punch except the last one which was published in a 1968 Punch.

* * *
Mr Gordon’s Craig’s production of Hamlet in Russian has been such a success at Moscow that there is a talk of bringing the entire production to London. Indeed it is said that an erudite has already started translating the play into English.
* * *
A writer in The Englishwoman complains that men prefer silly women to clever ones. And yet, surely, is it just the clever ones who get men to marry them?
* * *
In view of Mr Roosevelt’s shy disposition and hatred of publicity his decision to accept nomination for the Presidency in the interests of his country does him credit.
* * *
SECRETARY WANTED, 19—21
The second part of this, with good legs, is always omitted.

Don’t be too sad, however, if English humour will turn out not quite to your taste, “not your cup of tea”, as Americans say.
Foreseeing such reaction, G.B. Priestley wrote:
“Of course, it is quite possible that many thoughtful people abroad are well acquainted with English humour but do not find it very laughable, merely a rather mysterious alien drollery. That I can understand, for it is very much a national humour…”

Contributor: Ludmila Kravtsova
From Speak Out 3, 1998