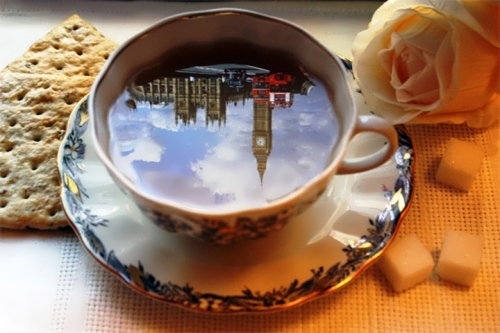 Here are the most significant symbols of England and Englishness.
One of the best English icons is a CUP OF TEA!
English people say jokingly: “Seven cups of tea will make you up in the morning; nine cups will put you to sleep at night. If you are hot, tea will cool you off, and if you are cold, it will warm you up. If you are depressed, it will cheer you up; if you are excited, it will calm you down.”
Tea came to Britain from China in the late 1500s, but it was only for the very rich. A pound of the cheapest tea cost about one-third of a skilled worker’s weekly wage! It became cheaper about three centuries later, when it was planted in India and later in Ceylon (Sri Lanka). People from all classes started drinking it.
Afternoon tea in England is a small meal, not a drink! They say that the fashion of afternoon tea was introduced in the early 1800s by the 7th Duchess of Bedford. It quickly became popular, and rich ladies started inviting their friends to their houses for a five-o’clock cup of tea.
Most people today use teabags to make tea, but some serious drinkers make tea in the traditional way. 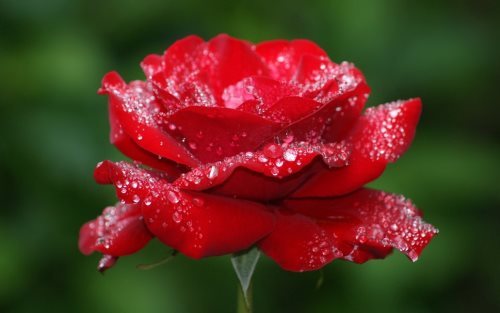 ROSE is the national flower of England and its icon. It all started during the time of civil wars (1455-1485) known as the Wars of the Roses. It was the war between the royal house of Lancaster (whose emblem was a red rose) and the royal house of York (whose emblem was a white rose). At the end of the war the two roses were combined in the Tudor rose. During the Tudor period, hundreds of inns were named the Rose — to show loyalty to the royal family. There are still many pubs and hotels all over the country named after this flower. In 1871, the newly formed Rugby Football Union selected an England team to play the first ever international match against Scotland. The committee chose a red rose as the team’s badge. Although England lost the match, held in Edinburgh, the country’s rugby teams have worn red roses ever since. 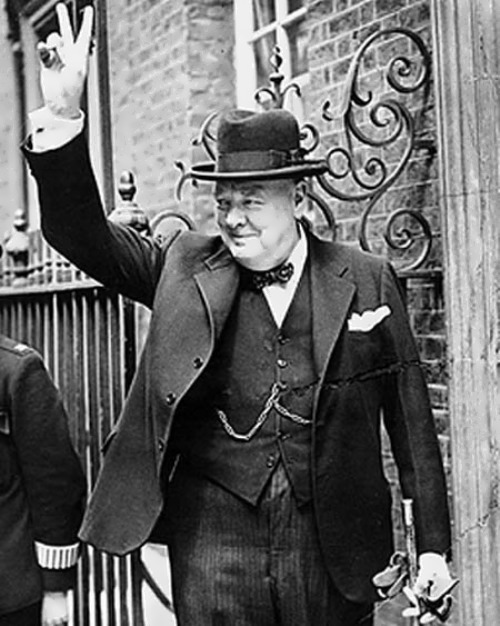 Nobody knows for sure where the V- sign came from but many English people have chosen it as a national icon.
During World War II it was used to mean victory, and it was used again by hippies in the 1960s and 1940s to mean peace. As the symbol of peace, it has become universal, while the «V for Victory» will forever be associated with the wartime prime minister, Sir Winston Churchill. 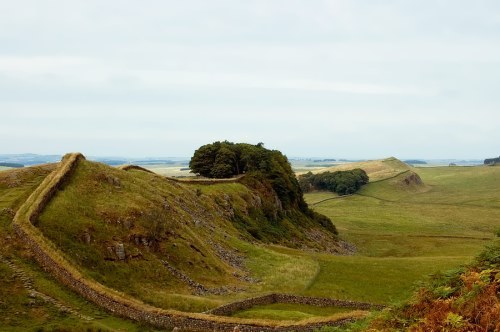 Hadrian’s Wall is an ancient wall across England from Carlisle in the east to Newcastle in the west. The Roman Emperor Hadrian wanted to protect Roman Britain from attacks by Scottish tribes. So he told his soldiers to build a wall. It took them nearly six years to complete it. The wall was 117 kilometers long and 4 metres high. But today only ruins left of Hadrian’s Wall.

THE ANGEL OF THE NORTH 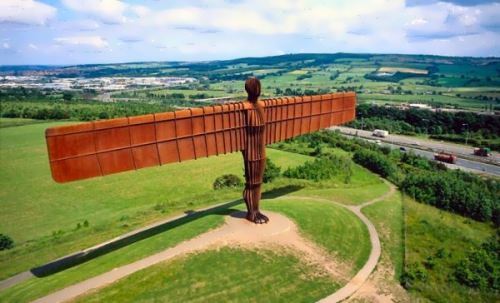 Angel Of The North by Antony Gormley

The Angel of the North is a very large metal sculpture of an angel with its wings held wide open. It stands very close to the A 1 road at Gateshead, in northeast England. It’s the largest sculpture in the country. It is 20 metres high and its wings are 54 metres wide. It’s creator was the sculptor Anthony Gormley.
It’s one of the most viewed pieces of art in the world — about 90,000 people see it every day! 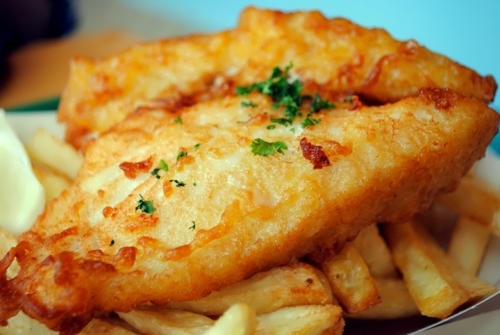 It all started about 150 years ago, when women in poor English families had to go out to work in factories. There was no time to shop and cook so they bought fast food in the street, on the way back from work. The most popular was fried fish with a piece of bread.
The first chips came from France. They were also sold in the street. But at first, no one thought of selling fish and chips together.
The idea to sell them together first came to a Londoner Joseph Malin. In 1860, he opened a fish-and-chip shop in Cleveland Street in London’s East End. Soon such shops were everywhere in working-class areas. More than 250 million portions are eaten in the country every year. 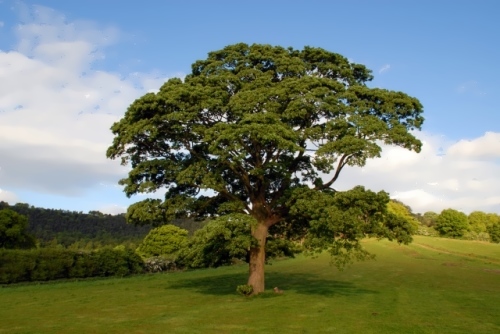 The oak has always been seen as the national tree of England. Its great height, age and strength made it the king of the English forest, and a symbol of endurance.
The tree was also sacred to the Druids and the Anglo-Saxons, and it sheltered an English king, Charles II, when he was on the run from his enemies. 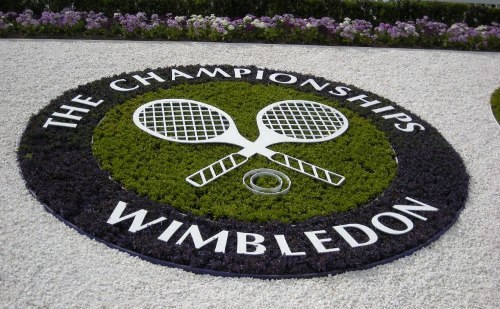 Wimbledon is the most prestigious tennis tournament in the world. Every tennis player’s dream is to play there.
The first tennis competition was held at Wimbledon in 1877!

THE EDEN PROJECT began as a dream. In the late 1990s Tim Smit decided to build a new Eden. He imagined a beautiful park with huge greenhouses filled with exotic plants from all over the world. Many people agreed to give money and Tim’s dream came true. In the spring 2001, the Eden Project, a large environmental park in Cornwall, opened to the public. 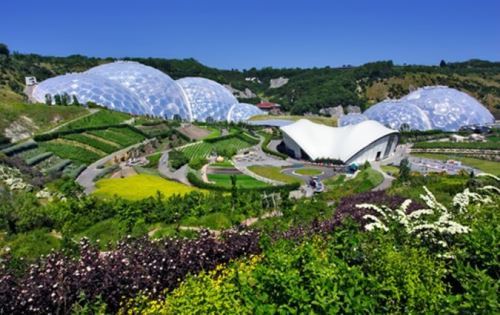 The Eden Project consists of two giant greenhouses, shaped like grapefruit halves, and an outdoor area. These are called «biomes». They recreate the natural environments of three different climates found around the world.
The Eden Project is much more than a collection of plants. The main purpose of Eden is to educate the public about the natural world, to show how we depend on plants and what we can do to save them.

ROBERT PEEL AND HIS BOBBIES 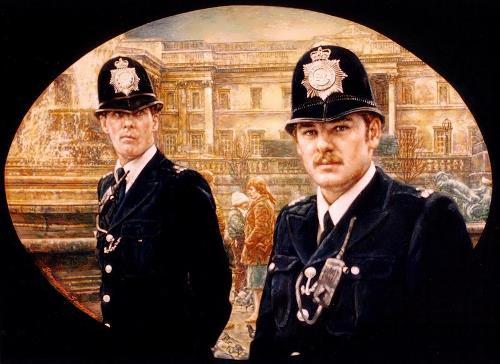 The image of the friendly British “Bobby” in a strange-looking helmet is known all over the world.
But how the British police officer got this name?
Robert Peel was a handsome man who became a brilliant student at Oxford University. He became a Member of Parliament when he was only 21. He is best remembered for starting the police force in London in 1829. The policemen were called “bobbies” or “peelers” after him. The top hat made the officer look taller, and helped people recognize a policeman when they needed one. Bobbies were not allowed to carry guns, worked 10 hours a day, and walked about 20 miles on duty. When Queen Victoria came to the throne police forces began to spread all over the country. 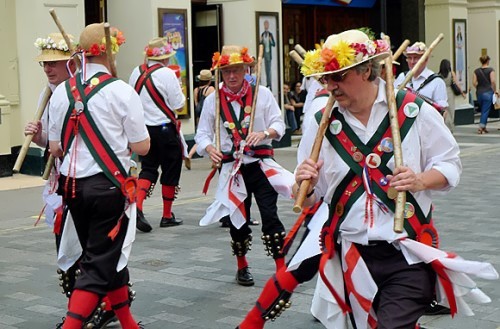 Every nation has a national dance. Argentina has its tango, Poland has the polka, Russia has the russkaya plyasovaya and England has the morris.
Every May Day people perform a traditional morris dance and welcome the return of spring. Most historians agree that it goes back at least to the 15th century. 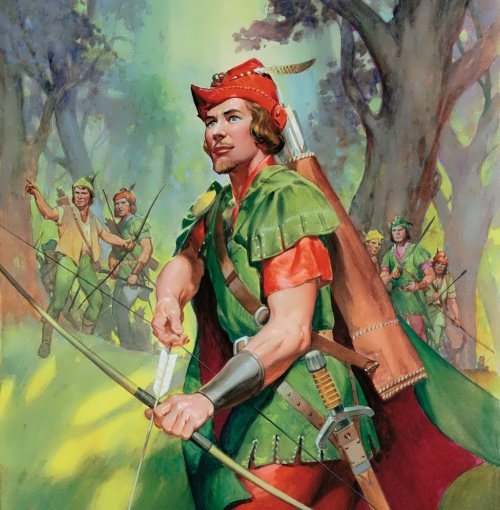 His adventures have been retold down the generations, from medieval ballads to Hollywood block-busters.
Robin Hood lived in Sherwood Forest, one of the largest forests in the country, near the town of Nottingham. They stole from the rich and gave to the poor.
The earliest legend of Robin Hood dates from the 1400s but it’s based on much earlier stories.
Each August the Robin Hood Festival takes place in Sherwood Forest and people travel from near and far to celebrate the life and times of the legendary outlaw. 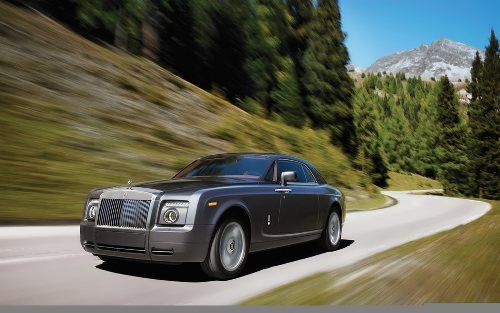 It is the most luxurious classic car in the world. It was the brainchild of engineer Henry Royce and car trader Charles Rolls. They wanted to make “the best car in the world.” The car was nicknamed the “Silver Ghost”.
During World War II the Rolls Royce Company produced engines for fighter planes.
Only a few people can afford such large, expensive cars -members of the Royal Family and other heads of state, millionaires and very rich celebrities.
The name Rolls Royce is often used to describe something very good and expensive: This is the Rolls Royce of electric guitars — it costs $ 5,000. 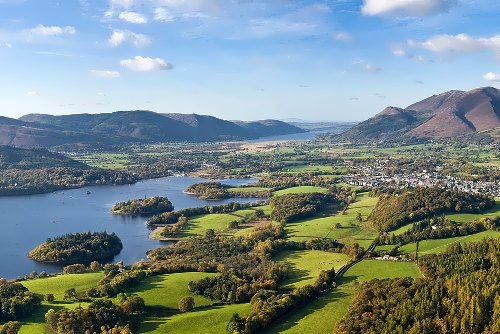 The Lake District is the most beautiful place in England. It attracts many thousands of people every year. There are 16 lakes and about 100 mountains in the Lake District, including the highest mountain in England, Scafell Pike, and the largest lake, Windermere.
English Romantic poets of the 19th century who lived in the Lake District and described its beauty are known as the Lake Poets. The most famous of them is William Wordsworth.
In 1951, the Lake District was made a national park. 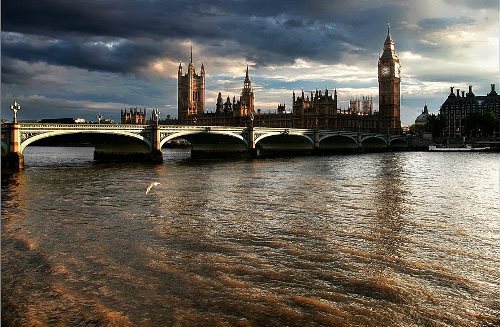 The Thames is the longest and most important river in England. The Romans called it the Tamesis, and the name is probably a Celtic word which means “broad river”.
Many places of interest lie on its banks (Oxford, Windsor, Greenwich, Hampton Court, Richmond). In London the river flows past the Houses of Parliament, Westminster Abbey and the Tower of London.
The river is often described by poets as “liquid history” and “Old Father Thames”.
There are 15 bridges across the Thames in London.

CRICKET is probably the most English of all sports. It’s very slow. Thirteen players are on the field, but ten of these stand still most of the time. 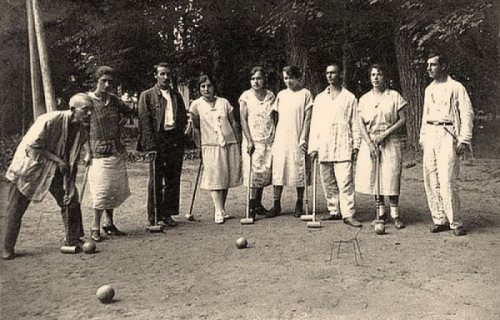 It is believed that the game dates back to the 16th century. Traditionally, it was played by men, though there are now several women’s teams.
In England, cricket symbolizes a way of life — a slow and peaceful.

Winnie-the-Pooh is the famous creation of Alexander Alan Milne. 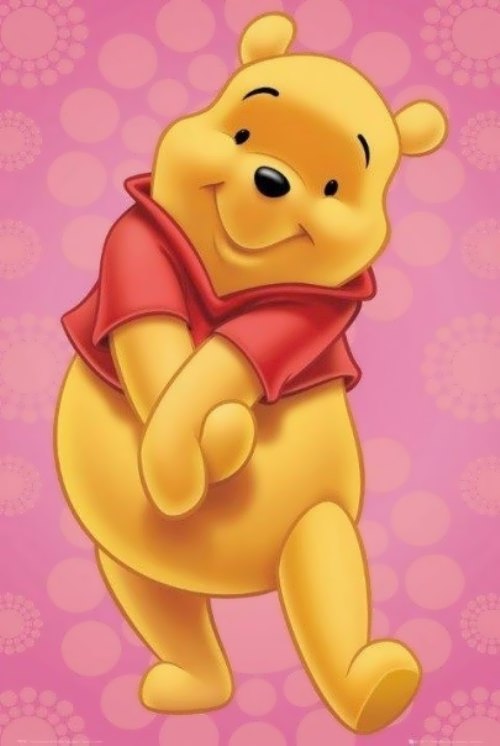 A.A. Milne (1882-1956) wrote poems, magazine articles, plays and even a detective novel, but he will always be remembered for creating Pooh, Piglet, Eeyore and Christopher Robin.
In real life Christopher Robin was Milne’s son. When he was a small boy he played with the real Winnie-the-Pooh, a bear his parents had bought at Harrods and given him for his first birthday.
Winnie first appeared in book form in Winnie-the-Pooh (1926) and The House at Pooh Corner.