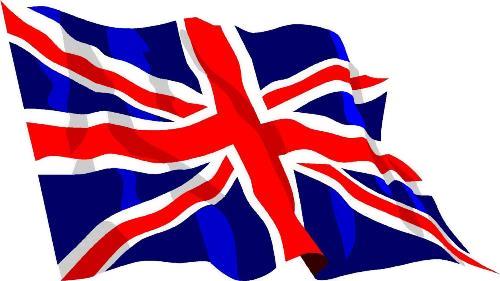 The Rose
The red rose was the emblem of the Lancastrians and the white rose that of the Yorkists, the two contending houses for the English throne in the Wars of the Roses (1455-1485). All rivalry between the Roses ended with the marriage of Henry VII, a Lancastrian, to Princess Elizabeth, daughter of Edward IV, a Yorkist. The red-and-white rose has since become the national emblem of England. 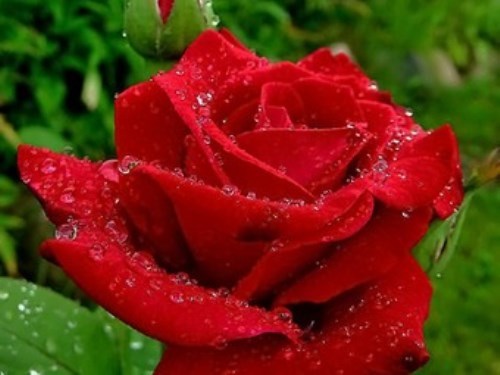 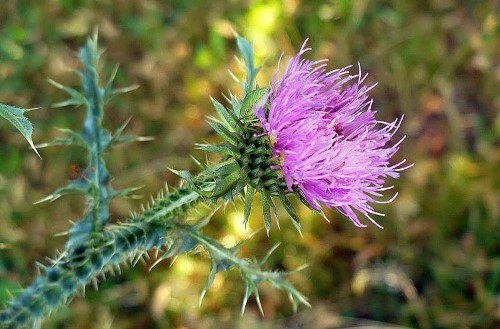 The thistle is the national emblem of Scotland. This is how, according to a curious legend, that humble plant came to be chosen as the national symbol in preference to any other.
In very ancient times, the Norsemen landed somewhere on the east coast of Scotland with the intention of plundering and settling in the country. The Scots assembled an armed force and stationed themselves at the only practical ford across the River Tay, the largest in Scotland.
As they arrived late in the day, weary and tired from a long march, they pitched camp and rested, not expecting the enemy to arrive before the next day.
The Norsemen, however, were nearby. Noting that no guards or sentries protected the camp, they crossed the River Tay, intending to take the Scots by surprise and slaughter them in their sleep.
To this end, they took off their shoes so as to make the least noise possible. But one of the Norsemen stepped on a thistle. The sudden and sharp pain he felt caused him to shriek. The alarm was sounded in the Scots’ camp. The Norsemen were put to flight, and as an acknowledgement for the timely and unexpected help from the thistle, the Scots made it their national emblem. 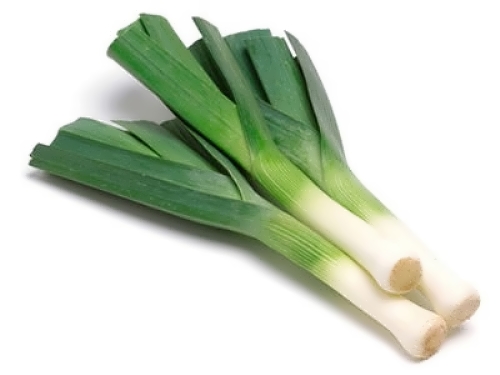 Welshmen all over the world celebrate St. David’s Day by wearing either leeks or daffodils. The link between the leek and St. David stems from the belief that he is supposed to have lived for several years on bread and wild leeks.
But there is another version of the story. The is known to have been displayed as a Welsh emblem in 1536 and in Henry V Shakespeare acknowledged as an ancient custom.
In Henry V Fluellen tells the King:
“If your Majesty is remembered of it, the Welshmen did good service in a garden where leeks did grow, wearing leeks in their Monmouth caps; which your Majesty knows, to this hour is an honorable pledge of the service; and I do believe your Majesty takes no scorn to wear the leek upon Saint Tavy’s day!”
One legend tells of a battle between the Welsh and the Saxons that was fought in a field of leeks.
At some time in the past, the leek was an important part of peoples’ diet, but it is not commonly eaten today. It is delicious when used in traditional leek and potato soup. 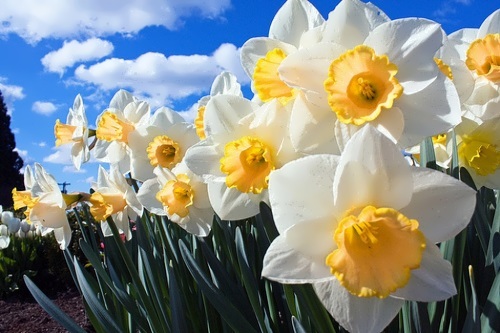 The daffodil is also associated with St. David’s Day due to the belief that it flowers on that day. It became an alternative to the leek as a Welsh emblem in the present century because some thought the leek vulgar. Though the daffodil has no claim to literary and historical distinction like the leek does, it has become the favored emblem as of late since some people find that it makes a more attractive buttonhole on St. David’s day. Daffodils and new-born lambs herald the summer in Wales. 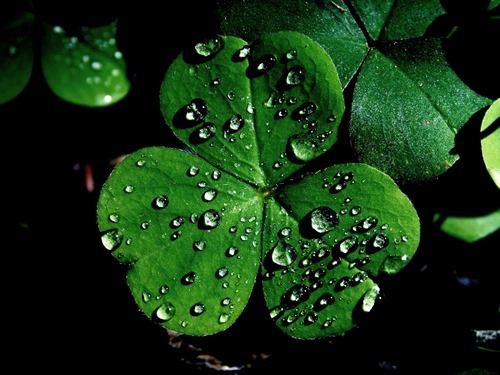 What the red rose is to Englishmen and the leek and daffodil to the Welsh, the little shamrock is to the Irish, and no Irishman worth his salt fails to wear this national emblem on St. Patrick’s Day, March 17. It is worn in memory of Ireland’s patron saint, whose cross is shown on the Union Jack by the thin cross under the cross of St. George.
A popular legend states that when preaching the doctrine of the Trinity to the pagan Irish, St. Patrick used the shamrock, a small white clover bearing three leaves on the stem, as an illustration of the Holy Trinity.
Shortly after the formation of the Irish Guards in 1902, the custom was established of presenting the national emblem to the new regiment on St. Patrick’s Day, which is known as Wetting the Shamrock; this is a convivial aspect of Irish loyalty to their patron Saint.

The Union Jack and “God Save the Queen/King”

The Union Jack is a popular name given to the flag of the United Kingdom. Usually it is called the Flag and consists of several flags. The flag is made up of three crosses.
St. Andrew’s cross is the Scottish flag. St. Andrew, a fisherman, was one of the 12 apostles who followed Jesus Christ. Paintings of St. Andrew often show him being martyred on an X-shaped cross. St. Andrew’s Day is celebrated on November 30. He is the patron saint of both Scotland and Russia. According to legend, in 832 AD, Oengus II led an army of Piets and Scots into battle against the Angles, led by Aethelstan.
The legend states that whilst engaged in prayer on the eve of battle, Oengus vowed that if granted victory he would appoint St. Andrew as the patron saint of Scotland. On the morning of battle white clouds forming an “X” shape in the sky were said to have appeared. Oengus and his combined force, emboldened by this apparent divine intervention, took to the field and were victorious despite their inferior numbers. 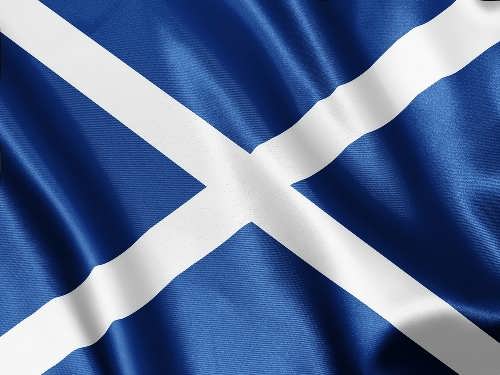 Having interpreted the cloud phenomenon as representing the crux decussata upon which St. Andrew was crucified, Oengus honored his pre-battle pledge and appointed St. Andrew as the patron saint of Scotland.
St. Patrick’s cross is the former flag of Ireland. St. Patrick is the patron saint of Ireland. He was born around 390 AD. He converted the Irish to Christianity and is supposed to have got rid of all the snakes in Ireland. St. Patrick’s Day is celebrated on March 17. It is known that St. Patrick was born in Britain to wealthy parents near the end of the fourth century. He is believed to have died on March 17, around 460 AD. Although his father was a Christian deacon, it has been suggested that he probably took this job because of tax incentives and there is no evidence that Patrick came from a particularly religious family. At the age of sixteen, Patrick was taken prisoner by a group of Irish raiders who were attacking his family’s estate. They transported him to Ireland where he spent six years in captivity. During this time, he worked as a shepherd, outdoors and away from people. Lonely and afraid, he turned to his religion for solace, becoming a devout Christian. After more than six years as a prisoner, Patrick escaped. 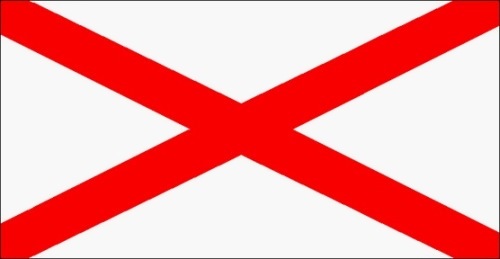 According to his writing, a voice that he believed to be God’s spoke to him in a dream, telling him it was time to leave Ireland. To do so, Patrick walked nearly 200 miles, from County Mayo, where it is believed he was held captive, to the Irish coast. After escaping to Britain, Patrick reported that he experienced a second revelation; in a dream, an angel told him to return to Ireland as a missionary. Soon after, Patrick began his religious training, a course of study that lasted more than fifteen years. After his ordination as a priest, he was sent to Ireland with the dual-mission of ministering to Christians already living in Ireland and beginning to convert the Irish.
The Welsh flag portrays a dragon. St. David, the patron saint of Wales, founded a number of monasteries in the country. Paintings of St. David normally show him with a dove on his shoulder. His best-known miracle is said to have taken place when he was preaching in the middle of a large crowd at the Synod of Brefi (the village of Llanddewi Brefi is said to stand on the spot where the miracle occurred). When those at the back of the crowd complained that they could not see or hear him, the ground on which he stood is said to have risen up to form a small hill so that everyone had a good view. A white dove was seen settling on his shoulder — a sign of God’s grace and blessing. His relics are now in St. David’s Cathedral in Wales. St. David’s Day is celebrated on the 1st of March.
St. George is the patron saint of England as well as of Germany, Portugal and Greece. St. George’s Day is celebrated on April 23. St. George’s Cross is the English flag. He was a soldier famous for saving Princess Cleolinda from being eaten by a dragon. A dragon or crocodile made its nest at the spring that provided water for the city of “Silene” (perhaps modern Cyrene) in Libya. Consequently, the citizens had to draw the dragon away from its nest for a while in order to collect water. To do so, each day they offered the dragon a sheep, and when no sheep could be found, they offered a maiden in its place. The victim was chosen by drawing lots. One day, this fate fell to the princess. The monarch begged that her life be spared, but to no avail. She was offered to the dragon, but St. George came along on his travels. He faced the dragon, protected himself with the sign of the cross and rescued the princess.
He wounded the dragon and took it back to the city of Silene on a lead, like a dog. As a result, the grateful citizens abandoned their traditional paganism and converted to Christianity.
In 1603, when Scotland was joined to England and Wales, the Scottish flag, a blue flag with a white St. Andrew’s Cross stretching from corner to corner, was combined with the English flag, which is white with a red St. George’s Cross. The flag of St. George can still be seen on churches in England today. 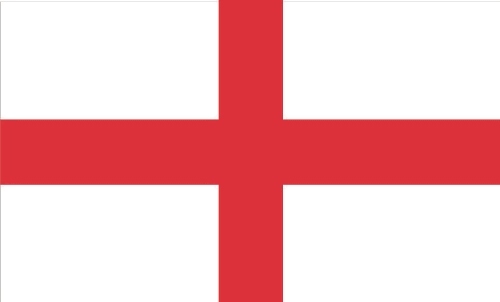 Later, in 1801, the Irish Flag, a white flag with a red St. Patrick’s Cross, was added.
This is how the British people got the Union Flag, which is red, white and blue. King James I (1566-1625) ordered that the British Flag be flown on the main mast of all British ships, except on ships-of-war. Here the flag was flown at the front of the ship, which is called the bowsprit. The end of the bowsprit was called the “Jack Star”, and so the flag began being called the Union Jack. A “jack”, by the way, is an old word for a sailor.
God Save the Queen/King is the British national anthem. The words and tune probably date back to the 16th century, but the song took its present from during the 18th century. The tune has been used for patriotic songs in the USA (My Country, Tis of Thee) and Germany.
(Е.Д. Федорова, В.А. Рубцов)