« The Thames
Holidays and Festivals in Great Britain » 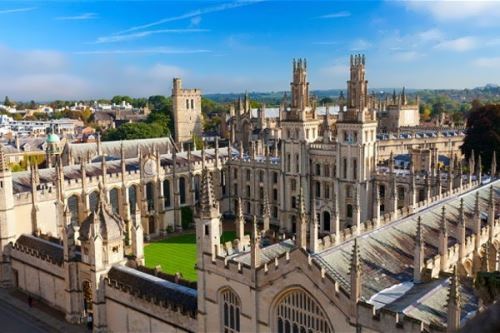 Oxford and Cambridge are the oldest universities in Great Britain. They are called Oxbridge to denote an elitarian education.
Only rich people send their children to these universities. The main characteristic feature of these universities is the tutorial (that means the individual tuition).
The normal length of the degree course is three years, after which the students take the degree of Bachelor of Arts. Some courses may be a year or two longer.
Oxford and Cambridge universities consist of a number of colleges, each self-governing and independent. Before 1970 most of all Oxbridge universities were single-sex (mostly for men). But now the majority admit both sexes. The administrative body of the University consists of the Chancellor (who is elected for life), the vice-chancellor (who is in practice the head of the University, and is appointed annually by the Chancellor) and two proctors, whose job is to maintain discipline and who are appointed annually. Each college has its staff called «Fellows».

The University is merely an administrative body, which organizes lectures, arranges examinations, grants degrees. Each college has its name. Most colleges have their own dining hall, library and chapel.
The University has laboratories and research institutes and other educational facilities. All the lectures are organized by the University. In every college there are students of various specialities but each student follows his own course of study.
The largest colleges have more than 400 students, the smallest have less than 30.
Oxford is one of the oldest universities in Europe. It didn’t come into being all at once. Oxford had existed as a city for at least 300 years before scholars began to resort to it.
The end of the 12th century saw the real beginning of the University. The first group of scholars at Oxford may have been joined by others from Paris, from other parts of Britain. A characteristic feature of Oxford is that many traditions of the Middle Ages are still current there. One of them is that the students have to wear gowns.
The earliest college buildings seem to have no definite plan. They expanded as the need for more room arose (the Queen’s College). New College had the first regular quadrangle.
Perhaps the most famous colleges are Christ Church, University College and All Souls. Nowadays there are 29 colleges for men, 5 for women and another 5 have both men and women members.
Oxford is a place of great beauty, but it is not just a shrine to the past. It is a living entity and its historic buildings are the homes of masters and students whose learning, thinking and ideas have a profound influence on culture, education, science and politics. Many eminent world-known scholars and scientists have been educated at Oxford. All the graduates of Oxford never forget «spirit of Oxford».
Cambridge University dates back as the 13th century. Today there are more than 30 colleges. The University is situated on the River Cam. The colleges line the right bank. The oldest university is Peterhouse (founded in 1284) and the most recent is Robinson College (1977). But the most famous is the King’s College. The building is the real example of English 15th century architecture.
Until 1871 the University was only for men. In 1871 the first women’s college was opened. In 1970s most colleges admitted both men and women.
Students at Oxbridge have different societies and clubs. Different sports are very popular. But the most popular sports are rowing and punting.
Every year at the end of March (or in early April) a contest between Oxford and Cambridge universities take place on the River Thames. The course is the 4 1/4 mile stretch of river. The race usually starts at midday or at 3 o’clock. By 1966 Cambridge had won 61 times, Oxford — 50 times.

EXERCISES
I. Answer the questions.
1. What does Oxbridge mean?
2. Which of them is older?
3. What makes these universities quite different from any other?
4. How long is the course of study?
5. What is the function of the University?