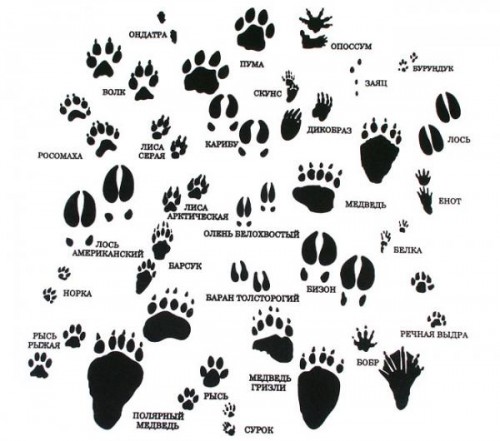 Читаем следы.
Reading the Trails
In the middle of November there was about six inches of snow on the ground. When there is snow on the ground it is easy to find the tracks of animals. So I went into the woods to read the story of the trail. Very soon I found a fresh fox trail.
A fox track is easy to recognize when there are clear foot-marks in dirt, soft ground or in a thin layer of snow. In deep snow you will see only a row of dimples instead of toe marks.
A small dog’s trail is very much like that of a fox, but each has it characteristics.

At once you see that the dog’s trail zigzags. This is due to the fact that his chest is much wider than that of a fox. The fox dimples are almost in one straight line. Now notice that the dog drags his toes, while the fox lifts his feet clean up and puts them clean down. In this way he can go silently through the woods. There were some lines made by fox’s bushy tail. These things clearly told me that the track was a fox track. 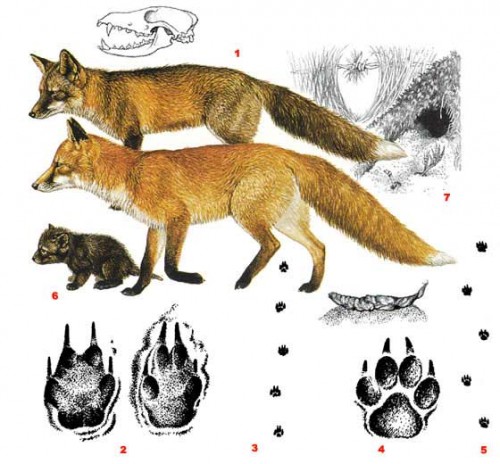 I followed the tracks for a quarter of a mile. Then the track went, not straight but again zigzag, to a hole in the ground. Near the hole lay a dead snake. What happened was clear to me. The fox pulled out a sleeping snake from its hole, killed it, left it on the snow, and went on. After half a mile, he came to a place where the snow was deep and soft.

In this part of the country it is the custom of the prairie-chickens to spend the cold nights in the deep snow. When there is a cold wind and a blizzard, and it is forty degrees below zero, they would freeze to death if they did not hide in the soft snow. The wind fills up the hole and no tracks remain.

The fox knew all this, and when he came to one point he stopped. His nose said to him, «Look out, there are chickens in the snow further on.» He stopped with one foot in the air. How do I know? Because the little mark ix was made by the tip of the fox’s paw, which hardly touched the snow. Therefore he stood still at this point. Then slowly (I know because the steps are short) he crawled along, sniffing. But at another point he lost the scent, so he turned back. 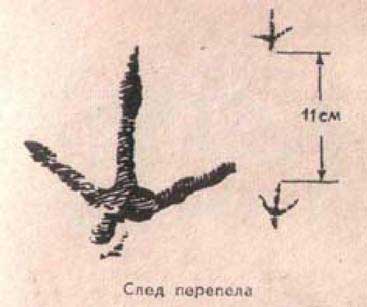 Now he could scent the prairie-chickens. He knew they were close. Following his trail, I found a few short, careful steps, then the deep marks of both hind feet, showing where the fox sprang forward just as two of the chickens broke out of the snow, and flew away as fast as they could. But the one was a little too slow. The fox caught him in the air, fell on the snow with him, ate part of the chicken and ran away with the rest.

Now I understood the meaning of the dead snake far back on the trail. A fox does not like to eat snake, and cold snake on a cold day is a very cold meal. He killed the snake, so that it could not get away, and then went to look for something better. If he found nothing better, he could always come back. But he got a nice hot bird instead, and did not have to come back.

And all of this history of the fox — and I knew that it was true — I got by following his tracks in the snow. I did not see the fox at all.

At another time I again followed the tracks in fresh snow on the ground. Again the tracks told me a very interesting story. Under a bush I saw the mark of a cottontail in the snow.Now notice that the two long marks of his hind feet are ahead of the two dots made by his front feet. And the faster he goes, the further ahead are the marks of the hind feet. He ran from one place to another, as if he tried to escape from some enemy that he was terribly afraid of. But what enemy? There were no other tracks, so I began to think the rabbit was mad. But I suddenly found a splash of blood. Oho! The rabbit was in danger and tried to escape from some real enemy. But what? There was still no other trail. 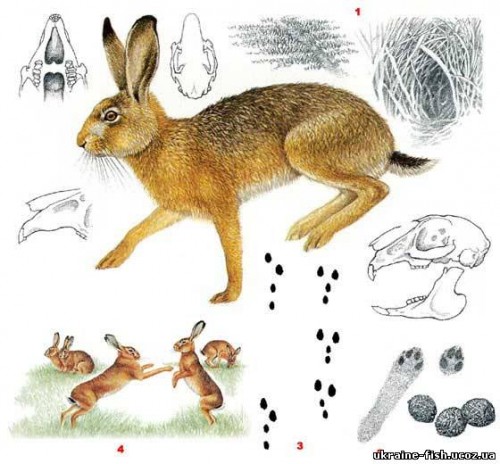 Then I saw marks that were clearly made by wings. Now I understood. The rabbit tried to escape from an eagle, a hawk or an owl. I found at last the body of the rabbit, partly eaten up. That meant that the enemy was not an eagle. An eagle eats up its victim completely or carries it off. It was a hawk or an owl then. Which?

I looked for proof, and near the body of the rabbit I found the two-toed track of an owl. A hawk’s track is different.

But which owl? There were three kinds of owls that lived in that valley. Again I looked for other proof and found it on a tree close by, — a small feather of an owl. But across it there were three brown bars. This told me at once that the bird which killed the rabbit was a barred owl.

I began to make a sketch of the tracks and of the body. And as I did so, the owl himself came flying back to have another meal. He perched on a branch just over my head. I had no camera with me, but I had a sketch-book, and made a sketch of him as he sat.

Thus he gave me good proof that my reading of the trail was correct. Besides, I had a sketch of the owl in my sketchbook.