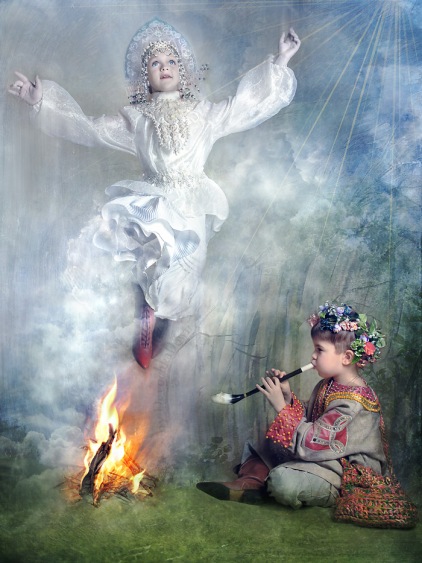 Снегурочка
Once upon a time, in a land far, far away, a peasant woman looked out the window of her cottage to watch the village children play in the snow. She did this often because, although she led a very happy life with her husband, there was still a longing in her heart. The woman and her husband had no children of their own, and their biggest wish was to one day be able to watch their own child play in the snow.
The husband one day suggested to his wife that they should go outside and build a snowman, instead of sitting in the house all day. The wife agreed, but wanted instead to build a girl — a snowmaiden. The couple spent that whole day carefully building and molding a snowmaiden. They inserted two bright blue beads for eyes, and a bright red ribbon for her mouth. Then they stood back to look at their beautiful creation. As they watched they noticed something, it looked as if the snowmaiden was smiling. The couple then realized that she was coming to life. After she smiled her hair curled up and she walked into the house. The peasant couple finally had a daughter of their own!

Snowmaiden grew to be beautiful. Her eyes gleamed bright blue and her flaxen hair hung down to her waist. Snowmaiden was however very pale, with no color in her cheeks or lips, but this did not make her any less beautiful.

As winter melted into spring, and the weather started getting warmer, Snowmaiden started to behave strangely. She no longer wanted to go outside to play with the other children, and she began to hide in the dark places of the house. The husband and wife began to worry about her. 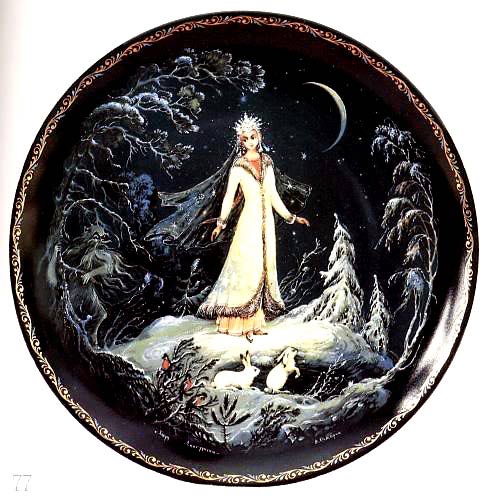 There was once a daughter born to Fairy Spring and Father Frost. This daughter was the most beautiful maiden that had ever been known, she had skin as pale as the snow, eyes blue like the sky, and thick blond hair that hung to her waist. She was named Snowmaiden.Fairy Spring had to hide her daughter from the Sun God, whose rays could easily destroy the beautiful girl, so for a very long time Snowmaiden lived deep within the woods. But it was very lonely there, and one day Snowmaiden decided to take a long walk. As she walked she heard a beautiful sound. At first it was very far away, but it drew Snowmaiden closer and closer to its source. Snowmaiden followed it for a long time, all the way to the edge of the forest. There in an open field sat Lyel, a farm boy, playing his flute. Snowmaiden listened and watched form the edge of the forest, and became enchanted with Lyel.Snowmaiden went to the edge of the forest every day to listen to the farm boy play his flute. Lyel always ignored the beautiful girl standing in the shade of the trees, and instead danced with the girls who sat with him in the field. This broke Snowmaiden’s tender heart, and she decided to go speak with her mother about it. «Mother,» Snowmaiden began, «please let me feel real love.» Fairy Spring understood that her daughter wanted the farm boy to fall in love with her. «If you want real love,» Fairy Spring answered, «you must leave the protection of the forest and go into the open field where the boy plays his flute.»The next day Snowmaiden once again followed the sweet sound of Lyel’s music to the edge of the woods. She stepped out of the trees, and walked into the opening. Lyel turned to look at her, and thought she was the most beautiful girl that he had ever seen in his life. Just then Snowmaiden stepped into a ray of sunshine, which illuminated her beauty to its fullest. But the Sun God’s ray was to strong for Snowmaiden, and she melted before Lyel’s eyes.