« The Press in Great Britain
London and places of interest » 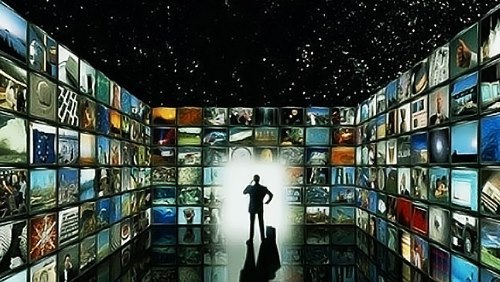 Television is the most popular entertainment in British home life today. In London people have four TV channels: BBC I, BBC II, ITV=Independent Television (Channel III) and Channel IV.
The BBC is known for its objectivity in news reporting. The BBC is financed by payments which are made by all people who have TV-sets. People have to pay the licence fee.
In 1932 the BBC World Service was set up with a licence to broadcast first to Empire and then to other parts of the world. There is no advertising on any BBC programme.
ITV started in 1954. Commercial television gets its money from advertising. The programmes on this channel are financed by different companies, which do not have anything to do with the content of these programmes.

ITV news programmes are not made by individual television companies. Independent Television News is owned jointly by all of them. So it has been protected from commercial influence.
There are different types of TV programmes in Great Britain. BBC and ITV start early in the morning. One can watch news programmes, all kinds of chat shows, quiz shows, soap operas, different children’s programmes, dramas, comedies and different programmes of entertainment on these channels.
News is broadcast at regular intervals and there are panel discussions of current events. Broadcasts for schools are produced on five days of the week during school hours. In the afternoon and early evening TV stations show special programmes for children.
Operas, music concerts and shows are presented at various time. A large part of TV time is occupied by serials.
Britain has two channels (BBC II and Channel IV) for presenting programmes on serious topics, which are watched with great interest by a lot of people. These channels start working on early weekday mornings. But they translate mostly all kinds of education programmes.
Weekend afternoons are devoted to sport. Sport events are usually broadcast in the evening.
These are the main channels in Great Britain. Only about a fifth of households receive satellite or cable.

EXERCISES
I. Answer the questions.
1. Can you describe some characteristics, which give the BBC its special position in Britain?
2. What is the difference between BBC and ITV?
3. What programmes are very popular in Great Britain?
4. When was the BBC World Service set up?
5. Which channels don’t have advertising?

III. True or false?
1. BBC is a commercial television.
2. All TV channels have advertising.
3. Channel IV is famous for its objectivity.
4. Independent Television News is owned by a private company.
5. TV stations show different programmes for children.
6. English people are not fond of soap operas.
7. Most people in Britain receive satellite.