« The Royal Academy
The Thames » 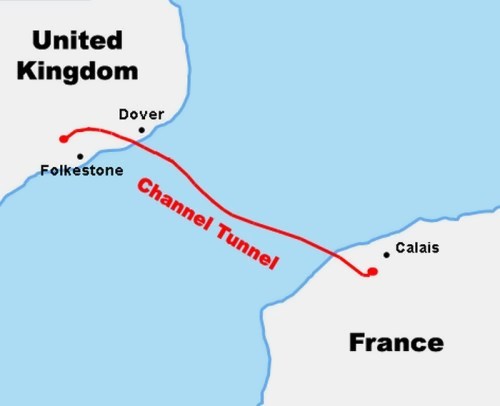 Great Britain is separated from the Continent by English Channel.
On May, 6, 1994 the Channel tunnel between Calais and Folkstone was opened by Queen Elizabeth II of Britain and President Mitteran of France. They were the first to travel under the sea.
That was the biggest project in which Britain took part. The process of the construction was very difficult and not always a successful one. The price of construction was very high (? 9 billion), several people were killed during the construction, and the start of service was several times postponed.

People didn’t reveal great enthusiasm. At first the tunnel was opened only for private cars. The saving in travel time didn’t compensate for the discomfort of travelling. People got used to travelling on comfortable ferries. And besides, they simply were afraid of travelling under the sea. But the authors of the project are rather optimistic, because the direct train services between Paris and London offer a great reduction of travel time. There is a project to use a high-speed train between London and the British end of the Channel tunnel. But that will be only in the 21st century.

EXERCISES
I. True or false?
1. The first to travel through the tunnel were the workers.
2. The project was a success from the very beginning.
3. The tunnel was opened between London and Paris.
4. People were not enthusiastic about the project.
5. At first the tunnel was opened to private cars.
6. A great reduction of travel time didn’t compensate for the discomfort of travelling.
7. A high-speed train will take people from Paris to London in the 21st century.