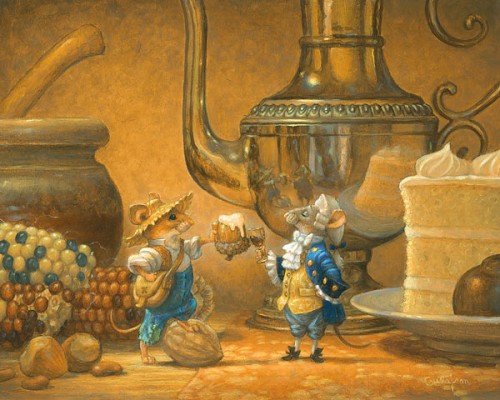 The Country Mouse and the City Mouse

Городская и сельская мышки
The following story of the two mice, with the similar fables of The Boy who cried Wolf, The Frog King, and The Sun and the Wind, are given here with the hope that they may be of use to the many teachers who find the over-familiar material of the fables difficult to adapt, and who are yet aware of the great usefulness of the stories to young minds. A certain degree of vividness and amplitude must be added to the compact statement of the famous collections, and yet it is not wise to change the style-effect of a fable, wholly.
I venture to give these versions, not as perfect models, surely, but as renderings which have been acceptable to children, and which I believe retain the original point simply and strongly.

Once a little mouse who lived in the country invited a little Mouse from the city to visit him. When the little City Mouse sat down to dinner he was surprised to find that the Country Mouse had nothing to eat except barley and grain.

«Really,» he said, «you do not live well at all; you should see how I live! I have all sorts of fine things to eat every day. You must come to visit me and see how nice it is to live in the city.»

The little Country Mouse was glad to do this, and after a while he went to the city to visit his friend.

The very first place that the City Mouse took the Country Mouse to see was the kitchen cupboard of the house where he lived. There, on the lowest shelf, behind some stone jars, stood a big paper bag of brown sugar. The little City Mouse gnawed a hole in the bag and invited his friend to nibble for himself.

The two little mice nibbled and nibbled, and the Country Mouse thought he had never tasted anything so delicious in his life. He was just thinking how lucky the City Mouse was, when suddenly the door opened with a bang, and in came the cook to get some flour.

«Run!» whispered the City Mouse. And they ran as fast as they could to the little hole where they had come in. The little Country Mouse was shaking all over when they got safely away, but the little City Mouse said, «That is nothing; she will soon go away and then we can go back.»

After the cook had gone away and shut the door they stole softly back, and this time the City Mouse had something new to show: he took the little Country Mouse into a corner on the top shelf, where a big jar of dried prunes stood open. After much tugging and pulling they got a large dried prune out of the jar on to the shelf and began to nibble at it. This was even better than the brown sugar. The little Country Mouse liked the taste so much that he could hardly nibble fast enough. But all at once, in the midst of their eating, there came a scratching at the door and a sharp, loud MIAOUW!

«What is that?» said the Country Mouse. The City Mouse just whispered, «Sh!» and ran as fast as he could to the hole. The Country Mouse ran after, you may be sure, as fast as HE could. As soon as they were out of danger the City Mouse said, «That was the old Cat; she is the best mouser in town,—if she once gets you, you are lost.»

«This is very terrible,» said the little Country Mouse; «let us not go back to the cupboard again.»

«No,» said the City Mouse, «I will take you to the cellar; there is something especial there.»

So the City Mouse took his little friend down the cellar stairs and into a big cupboard where there were many shelves. On the shelves were jars of butter, and cheeses in bags and out of bags. Overhead hung bunches of sausages, and there were spicy apples in barrels standing about. It smelled so good that it went to the little Country Mouse’s head. He ran along the shelf and nibbled at a cheese here, and a bit of butter there, until he saw an especially rich, very delicious-smelling piece of cheese on a queer little stand in a corner. He was just on the point of putting his teeth into the cheese when the City Mouse saw him.

The little Country Mouse stopped and said, «What is a trap?»

«That thing is a trap,» said the little City Mouse. «The minute you touch the cheese with your teeth something comes down on your head hard, and you’re dead.»

So the little Country Mouse went back to his home, and there he stayed all the rest of his life.

How to Tell Stories to Children and Some Stories to Tell
By: Sara Cone Bryant