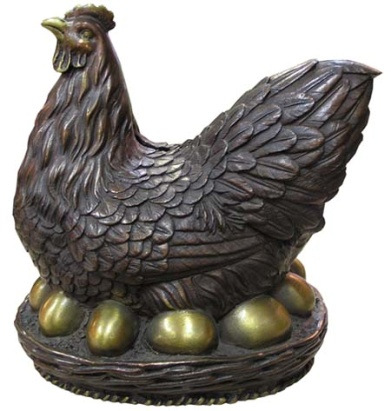 The hen that land the golden eggs

Курица несущая золотые яйца
Tina was a little chubby girl. She belonged to a poor family. Though she was very poor, yet she was very charitable. She would give away even her bread to anybody who needed it. A magician was very pleased with her goodness. He gave her a fat hen. Tina was very happy to have the hen. She could now get an egg every day to eat.
She waited for the next day excitedly. Early in the morning, she went to the hen to get egg. The hen had laid an egg. But to Tina’s surprise, it was not an ordinary egg. It was made of gold. Tina picked up the egg and gave to her mother. She was also thrilled at the sight of a golden egg. They sold the egg to the jeweller.

As Tina and her mother got enough money for the egg, they went to the market and bought fine clothes and lovely shoes for themselves. Tina bought cakes and chocolates too. Tina began to get a golden egg from the hen every day. When Tina got quite rich, she began to behave like other rich people. She did not help the poor any more.

One day, she even rebuked a little poor boy who asked her for a piece of bread. The poor boy went away weeping. The magician was very angry at this great change in Tina. He thought of setting her right.

The next day, when Tina went to the hen to collect the golden egg, she was shocked to find two fried eggs in place of the golden one.

She lost her temper and shouted at the hen, «Where is the golden egg?»

Seeing Tina angry, the hen shouted back, «Cluck, cluck!» At this Tina took the broom and began to beat the hen.

She said, «You bloody idiot! What have you laid? Is this a golden egg? I shall beat you to death.» The hen ran for its life. But Tina followed it and left it half-dead.

Next day, the magician came to Tina and said, «Why did you beat the hen?»

«It laid fried eggs instead of a golden egg.»

«It is not its fault. You are responsible for this. Don’t you know how ill- mannered and haughty you have become? I will take the poor hen back. Or, you must change yourself.» Tina realized her mistake. She said, «I’m sorry. No doubt, I deserve this punishment. I shall remember that once I was also a poor girl.»

The magician left without taking back the hen. Tina searched out the poor boy whom she had rebuked the other day. She gave him food to eat and new clothes to wear. The hen again began to lay golden eggs and Tina began to help the poor.

The Hen that Laid Golden Eggs