« System of Government in GB
Television in Great Britain »

The Press in Great Britain 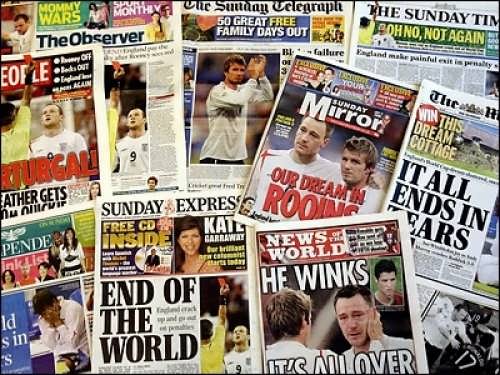 In Britain newspapers differ greatly from each other in the type of news they report and the way they report it.
On the one hand, there are «quality» news-papers: The Times, The Financial Times, The Guardian, The Daily Telegraph. These papers report major national and international news stories, with the world of politics and business and with the arts and sport.
On the other hand, there are «populars» or «tabloids», so called because of their small size. Popular papers (The Daily Mail, The Daily Express, The Daily Mirror, The Sun, The Daily Star) pay much attention to sensational news, extraordinary events, catastrophes, accidents, private lives of royalty and nobility, of people of art, of music and movie stars.

Popular papers use many photographs and cartoons. It is often said that the popular press aims to entertain its readers rather than inform them. The tabloid press is far more popular than the quality press. The average daily circulation for The Daily Mirror is almost 3,200,000 while for The Times it is 450,000. The most popular quality paper is The Daily Telegraph with a circulation of around 1,100,000 per day, compared with The Sun’s circulation of over 4,170,000. It is estimated that two out of every three adults regularly read a national daily newspaper.
In addition to 12 national daily newspapers there are 9 national papers which are published on Sundays. Most of the Sundays papers contain more reading material than the daily papers, and several of them include colour supplements — separate colour magazines which have special supplements with articles on music, TV, sports and a lot of advertisements of consumer goods. Reading a Sunday paper, like having a big Sunday lunch, is an important tradition in many British families.
Nearly every area in Britain has one or more local newspapers — in England alone there are around 90 daily papers and over 850 which are published once or twice a week. Local newspapers report local news and advertise local business and events.
Newspapers in Britain are privately owned and the editors of the papers are usually allowed considerable freedom of expression. The offices of most papers are situated in Fleet Street in the City of London, which is the centre of British journalism. British papers are bought and read not only in the United Kingdom, but also in many other countries.

EXERCISES
I. Answer the questions.
1. How do newspapers differ from each other?
2. What newspapers present important political news?
3. What news do «populars» pay attention to?
4. Is the «quality» press more popular than the «tabloid» press?
5. Which newspapers include colour supplements?
6. What information do local newspapers publish?
7. Are British newspapers privately owned?
8. Where are the offices of most papers situated?

II. Choose the right answer.
1. The «quality» papers try to entertain rather than inform . . .
a) true.
b) false.
2. Most colour supplements are published on Sundays and are . . .
a) bought with Sunday papers.
b) bought separately from the Sunday papers.
3. The most popular «quality» newspaper is . . .
a) The Times.
b) The Daily Telegraph.
4. Newspapers in Britain are owned by . . .
a) the Government.
b) individuals and publishing companies.

III. Fill in the gaps.
1. British newspapers are very much different from each other in the way they . . . news.
2. There are . . ., which pay attention to sensational news and extraordinary events.
3. The popular press aims to . . . its readers.
4. There are 9 national papers, which are published on . . . .
5. Reading a Sunday newspaper is an important … in many British families.
6. Local newspapers are published … or … a week.
7. The centre of British journalism is … .