« The Museum of Transport
The Channel Tunnel » 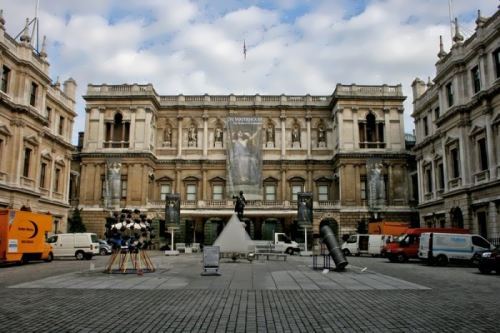 There is a house of great beauty and colour in London. This is Burlington House. Since 1869 it has been the Royal Academy of Arts.
In 1768 a group of leading painters, sculptors and architects presented a memorial to King George III. The young art-loving monarch declared his patronage, protection and support. All succeeding Sovereigns have accepted the style of «Patron, Protector and Supporter» of the Royal Academy. The monarch formally sanctions the elections of new Royal Academicians.
The first President of the Academy was Sir Joshua Reynolds, whose statue (palette and brush in hand) surveys the forecourt of Burlington House. He was President for 24 years and created in the Academy a body of highly skilled professional artists.

In 1771 the Academy established its headquarters at Somerset House and remained there until 1837 when it moved to the east wing of the National Gallery.
The prime purpose of the Academy is the teaching of art to the most talented students. About 100 students attend the Academy School. They’re selected by examinations from those who have spent two or more years at London or provincial art schools.
Since 1768 about 7,000 artists and architects have been trained free of charge in the School of Painting and Drawing, Sculpture and Architecture. The students study the main «classic disciplines». Several students in recent years have won major international awards.
The exhibitions of the students’ work in June and November attract attention of many people: teachers, art critics and gallery owners.
There are two annual exhibitions, organized by the Academy: the Winter Exhibition and the Summer Exhibition.
The Academy also organizes special exhibitions in its Diploma Gallery.
The Summer Exhibition has been held since 1769. It is the largest annual open art show in the world. About 10,000 works are judged by the Royal Academicians. Different styles and traditions are represented at the Exhibition. It is open for 3.5 months. The majority of the works are for sale.
The Academy believes that it is important to give all artists an opportunity to exhibit and sell their works. There are no other such exhibitions.

II. True or false?
1. The Royal Academy of Art was formed in 1869.
2. King George III was the first President of the Academy.
3. In 1837 the Academy moved to the National Gallery.
4. The prime purpose of the Academy is teaching the most talented students.
5. About 7,000 artists and architects have been trained in the Academy.
6. Every year two exhibitions are organized by the Academy.
7. The Winter Exhibition is the largest annual open show in the world.