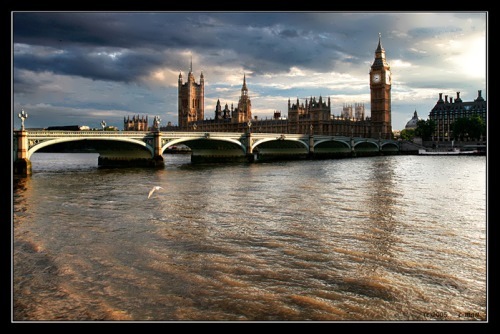 The River Thames is one of the sights of London. Tourists come to admire the beauty of Cleopatra’s Needle, Big Ben and the Houses of Parliament. In fact the river isn’t just a part of the scenery. Without the river London wouldn’t exist. Let’s look back into history.
Two thousand years ago, in A. D. 43 a Roman army decided to cross the Thames at a point where a bridge could be built. That was the beginning of the City of London.
The Thames connected the settlements of the Romans at Kent and at Colchester. All foreign traffic and goods had to cross the Roman bridge, that’s why the nearby land grew into a key port, thus increasing trade with the Continent.
Over the next five hundred years, London exported the nation’s wool, cattle and imported fine clothes from Flanders, wine from France, furs from Scandinavia. The tradesmen formed guilds, which protected their interests and strengthened London’s position as a commercial centre.

The 16th century brought new horizons in exploration and conquest by sea. But there appeared some problems. The twenty arches of London Bridge disturbed the river’s current, causing «rapids». The ships were forced to stop below the bridge, paying small boats to take their goods upstreams.
To solve this problem the first docks were built in the 17th century at Rotherhithe. In the 18th and 19th centuries the docks were also built on the Isle of Dogs. In 1908 the Port of London Authority was formed to look after them.
The importance of the Thames was great. London has changed greatly over the years.
At Chelsea Bridge two periods of history stand facing each other. On the North bank is the Royal Hospital. This house was built in the 18th century by Sir Christopher Wren.
On the South bank there is Battersea power station, built to provide electricity for Londoners.
If we move downstream, we’ll come to Vauxhall Bridge. This area contains factories and offices.
Under Lambeth Bridge, the river flows on past the Victoria flower gardens towards Westminster Bridge. Here are the Houses of Parliament and Big Ben, built in the 19th century in the gothic style.
From this point all along the embankment run the Embankment Gardens, with their tramps, memorials and flowers. At the riverside itself there is a row of charming Victorian lamp-posts decorated with ferocious- looking dolphins. Even the public benches are decorated with winged sphinxes. You can also admire Cleopatra’s Needle, a huge obelisk carved in Ancient Egypt and given to Queen Victoria and Great Britain in 1820. It was placed by the river in 1878, and a «time box», containing objects typical of that time was buried beneath it.
Near Waterloo Bridge, on the South bank of the river is a group of modern, concrete buildings. These include the Royal Festival Hall, Queen Elizabeth Hall, and the new National Theatre. Waterloo Bridge is concrete and modern, but it replaces an older bridge built to mark the anniversary of the Battle of Waterloo. The lampstandards along the bridge were made from guns captured at the battle.
As you pass the widest of London’s bridges — Blackfriars Bridge — you see the dome of St. Paul’s.
The next bridge is Southwark Bridge, which leads to Southwark Cathedral (it is as beautiful as Westminster Abbey). Then you come to London Bridge. Originally it was made of wood. The first stone bridge wasn’t built until 1176. A new London Bridge replaced it in 1831, but you wouldn’t find this London Bridge now either, as it was sold to America in 1972. It was taken there stone by stone to be reassembled as a tourist attraction. The British have a modern replacement now.
But the bridge that symbolizes London to most people is Tower Bridge.
Much of London’s wealth has been generated by the trade and industry brought by the river. The river became badly polluted in Victorian times. Industrial waste flowed freely into it. There was a terrible smell. All the fish died.
Since the 1950s, new laws have controlled industrial waste and sewage levels in the Thames. Now the river is much less polluted. Fish have returned to the cleaner water. Plea-sure boats sail from Westminster and Charing Cross piers, taking summer visitors to Greenwich and Hampton Court, Palace.
To protect London from tide the Greater London Council decided to build a barrier across the river at Woolwich. The floodgates lie on the river bed in normal weather, but can be raised to shut off dangerously high waters.
London could never have lived without the Thames.

EXERCISES
I. Answer the questions.
1. Why were the first docks at Rotherhithe built?
2. Who was the architect of the Royal Hospital?
3. What anniversary does Waterloo Bridge mark?
4. Which bridge is the widest?
5. Where can you see London Bridge?
6. Which bridge symbolizes London?