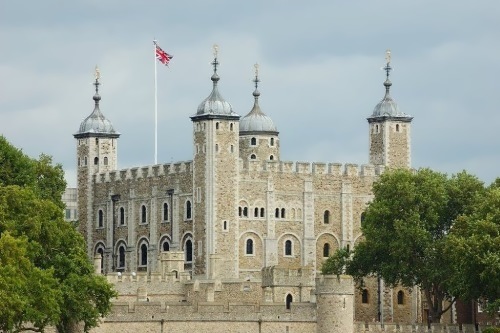 The Tower of London was started in 1066 by William the Conqueror. He built his fortress beside the River Thames to protect London from enemies. The Tower has been many things throughout its 900-year history: a palace, a fortress, a prison, a place of execution, and even a zoo. Today, the Tower is a historical museum. There are about 150 people and eight ravens live in the Tower. Some people think there are also ghosts there.
The White Tower is the oldest building on the territory. English kings ate, slept and ran the country there. But the first person to live in the White Tower in 1100 was a prisoner named Ranulf Flambard, who escaped down a rope from an upper window. Later the Tower was made larger and stronger. The Queen’s House built for Queen Anne Boleyn, the second wife of Henry VIII was the last palace built in the Tower. But she lived there only as a prisoner for 18 days awaiting her execution. She was beheaded not far from the palace — on Tower Green.

The Tower of London is the oldest fortress in Europe. It was almost impossible for the enemy to enter the Tower and it was even harder to leave it. The walls of the White Tower are 27 metres high and 4,6 metres thick at the base.

The Zoo
Exotic animals were first taken to Britain in the thirteenth century when King Henry III received a gift of 3 leopards and an elephant. The animals lived in the Tower of London in a special place. Later the King of Norway presented Henry III with a polar bear. The bear liked to go fishing in the Thames with a strong rope round its neck. That was the start of the London Zoo. In 1835 all animals left the Tower and were sent to Regent’s Park. Only the ravens stayed on.

Ravens
Special guards, known as beefeaters, look after the Tower and take care of the black ravens that live there. There is an ancient legend that the Tower and Great Britain will fall if the ravens ever leave the fortress. That’s why they get meat and biscuits every day. But their wings are clipped so that they can’t fly away.

The Beefeaters
The Beefeaters have guarded the Tower since the reign of Henry VIII. To become a beefeater today you have to serve in the army for at least 22 years. The name “Beefeater” has come from the time when the guards at the Tower were paid part of their salary with meat (beef). This took place until the 1800s.
Today, they work mostly as guides. They show people around and tell stories about all the terrible things that have happened here. No one knows more about the history and secrets of the Tower than these famous men. 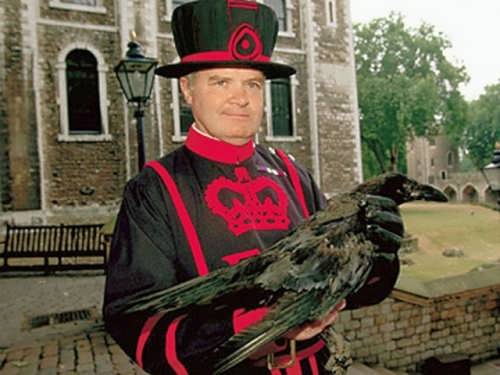 Beefeater with the raven

The Prison
During the troubled times of the Tudors and Stuarts the Tower became famous as a prison. Many kings, queens and noblemen were locked up there. Many, like Lady Jane Grey (the nine-day Queen) or Anne Boleyn, lost their heads on Tower Green.
The last time the Tower of London was used as a prison was during the Second World War when German spies were kept and sometimes shot there.
In Tudor times, instead of going to a football match or a rock concert people spent a Sunday afternoon at a public execution. It usually took place on tower Hill, just outside the Tower of London. Many prisoners were brought to the Tower by boat down the River Thames. They passed through Traitor’s Gate.

The Crown Jewels
The Jewel House at the Tower of London is the home of the most valuable collection of jewels in the world, the Crown Jewels. Once they were stolen by a man called Colonel Blood. But he was caught just as he was leaving the Tower. Thomas Blood didn’t have to go to prison. The king gave him a pension instead.
The St Edward’s Crown is used only once in the monarch’s reign, at the moment of coronation. It weighs over two kilograms and is too heavy to wear for too long, so before leaving Westminster Abbey it is replaced by the much lighter Imperial State Crown. The State Crown is worn on state occasions, like the Opening of Parliament. 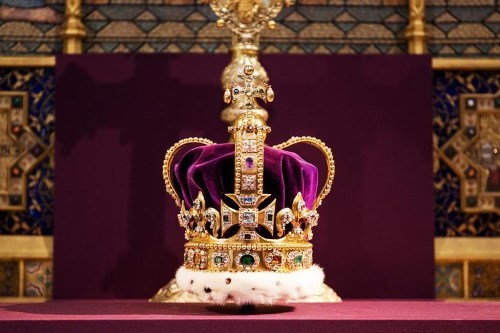