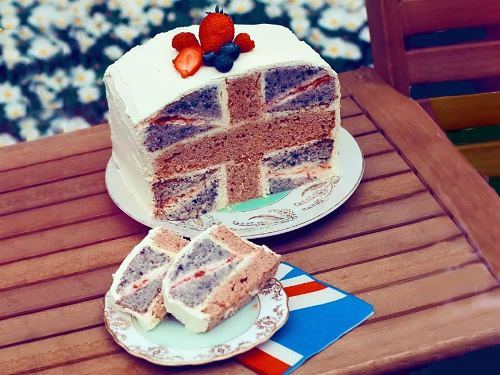 British Meals
Traditionally English people have three meals a day: breakfast, lunch and dinner.
Breakfast is served in the morning. It used to be a large meal with cereal, eggs and bacon, sausages, tomatoes. But such a large breakfast takes a long time to prepare and is not very healthy. Nowadays, Britain’s most popular breakfast consists of cereal, toast with marmalade, juice and yogurt with a cup of tea or coffee.
Lunch is a light meal. Most people have no time to go back home for lunch so they eat at school, cafes, pubs or restaurants.

The main meal is dinner, which is usually between 6 and 7 p.m. A typical evening meal is a meat dish with vegetables and dessert.
The most important meal of the week is the Sunday dinner, which is usually eaten at I p.m. The traditional Sunday dish used to be roast beef, but nowadays pork chicken or lamb are more common.
On Sunday evenings people have supper or high tea. The famous British afternoon tea is becoming rare, except at weekends.

Questions:
1. How many meals a day do English people have?
2. What did they use to eat for breakfast?
3. What do they usually eat nowadays?
4. Is lunch a large meal?
5. Where do English people eat lunch?
6. What dishes are served for dinner?
7. What is the most important meal of the week?
8. Is British afternoon tea still popular?

Meals
The usual meals are breakfast, lunch, tea and dinner. A traditional English breakfast is a very big one — sausages, bacon, eggs, vegetables. But many people just have cereal with milk, juice or yoghurt, a toast with marmalade, jam or honey. Marmalade is made from oranges and jam is made from other fruit. The traditional breakfast drink is tea which people have with cold milk. Some people have coffee, often instant coffee, which is made with just hot water. Many visitors to Britain find English coffee just horrible.
Lunch isn’t small either. At lunch, which is about one o’clock, cold mutton, fish with potatoes, salad and pickles generally grace the table. Lunch is a quick meal. In cities there are a lot of sandwich bars, where office workers can choose the kind of bread they want — brown, white, or a roll — and then all sorts of salad and meat or fish to go in the sandwich. English mutton is a treat, and it is prepared in such a way that you wouldn’t know it is mutton. Salad is a little different from ours. You only get the clean green leaves and the so-called «salad dressing», a mixture of oil, vinegar, salt, pepper and mayonnaise, that you may take according to your taste. English pubs often serve good, cheap food, both hot and cold. School children can have a hot meal at school but many just take a snack from home — a sandwich, a drink, some fruit, some crisps.
After lunch most people take coffee, though tea is the favourite beverage in England. That’s why there are no «coffee houses», but tea rooms and luncheon rooms are in abundance. There is nothing like an English party, at home or in the open air. Tea means two things. It is a drink and a meal.
Some people have afternoon tea, with sandwiches, cakes, and, of course, a cup of tea. Cream teas are popular. You have scones (a kind of cake) with cream and jam. The evening meal is the main meal of the day for many people. They usually have it quite early, between 6.00 and 8.00, and often the whole family eat together. Dinner begins with some salad, followed by a clear soup, fish, vegetable and dessert. In simplier homes the schedule is somewhat different. In the morning they have breakfast, at midday — dinner, which is considered to be the chief meal, tea in the afternoon and supper in the evening. The supper might consist of an omelette, bacon, sandwich and a cup of tea, coffee or cocoa.
On Sundays many families have a traditional lunch. They have roast meat either beef, lamb, chicken or pork with potatoes, vegetables and gravy. Gravy is a sauce made from the meat juices. When eating out, that is, on a picnic, the English load their luncheon baskets with all sorts of sandwiches made of thin slices of bread and butter with meat, ham, raw tomatoes or cucumbers. There in the basket you would likely find, besides cakes and biscuits, some bottles of ginger beer.
The British like food from other countries, too, especially Italian, French, Chinese and Indian. People often get takeaway meals — you buy the food at the restaurant and then bring it home to eat. Eating in Britain is quite international.

EXERCISES
I. Answer the questions.
1. What are the usual English meals?
2. Is English breakfast big or small?
3. What do people have for breakfast?
4. Do British people have soup for lunch?
5. What’s the difference between English and Russian salad?
6. What does «tea» mean?
7. When do the English have dinner?
8. Sunday lunch is something special, isn’t it?
9. What do British people load their luncheon baskets with?
10. What do foreign people think of English coffee?

II. True or false?
1. Many British people have a big breakfast.
2. People often have cereal or toast for breakfast.
3. Marmalade is made from any fruit.
4. People drink tea with hot milk.
5. Many foreign visitors love English coffee.
6. All British people have a hot lunch.
7. Pubs are good places to go for lunch.
8. British people eat dinner late in the evening.
9. Sunday lunch is a special meal.
10. When you get a takeaway meal, you eat it at home.

2. «Salad-dressing» is . . .
a) a special dish, consisting of different vegetables.
b) a salad topping.
c) a mixture of oil, vinegar, salt, mayonnaise.