« Are you a liar?
English Idioms » 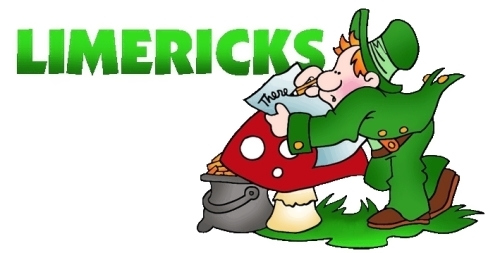 British people are very fond of limericks — short humorous poems full of absurdity and wit. The classic limerick has 5 lines, three long and two short ones. It usually begins by introducing a person and a place and often has a surprise in the last line. Here is an example:
There was a Young Lady of Niger,
Who smiled as she rode on a tiger.
They returned from the ride
With the lady inside
And the smile on the face of the tiger.

Nobody knows when the first limerick was composed, or why it took its name from the country of Limerick in Ireland. The very first limericks were not even funny. But in the 19th century this verse form was popularized by Edward Lear, the father of English “Nonsense”, and for over 100 years it has entertained both children and grown-ups.
Edward Lear was born in 1812 in London. He was the twelfth child of the family and had to earn his own living at the age of 15. When he was 19 he began to work as an artist at the zoo. The next year he published a book of coloured drawings of parrots. The Earl of Derby liked Lear’s work and invited him to stay with his family and paint the collection of his birds. Lear worked for him for four years, and it was during that period that he wrote his first limericks to amuse the Earl’s grandchildren. These nonsense verses were illustrated by charming pen drawings.
Ten years later, Lear published his first Book of Nonsense, the opening verse ran:

There was an Old Man with a beard,
Who said, ‘It is just as I feared! —
Two Owls and a Hen,
Four Larks and a Wren,
Have all built their nests in my beard!’

In later years Lear published several additional volumes of nonsense verses and even songs, but he never thought much of them. He would have preferred the world to remember him as a landscape painter.
Lear’s books were a great success, and limerick writing became very popular. Many great authors turned their hand to them.
Some of the best limericks emerged from competitions run in the late nineteenth century by “Punch”, the well-known British humorous magazine.

There was an Old Man with a nose,
Who said, ‘If you choose to suppose
That my nose is too long,
You are certainly wrong!’
That remarkable man with a nose.

There was a young Lady whose chin
Resembled the point of a pin;
So she had it made sharp,
And purchased a harp,
And played several tunes with her chin

There was a Young Lady of Portugal,
Whose ideas were excessively nautical;
She climbed up a tree
To examine the sea,
But declared she would never leave Portugal.

There was an Old Man who supposed
That the street door was partially closed;
But some very large rats
Ate his coat and his hats,
While that futile Old Gentleman dozed.

There was an Old Man of Nepal,
From his horse had a terrible fall;
But, though split quite in two
With some very strong glue
They mended that Man of Nepal.

There was an Old Man of Peru,
Who watched his wife making a stew;
But once by mistake,
In a stove she did bake
That unfortunate Man of Peru.

There was an Old Man on some rocks,
Who shut his wife up in a box;
When she said,’Let me out!’
He exclaimed, Without doubt,
You will pass all your life in that box’.