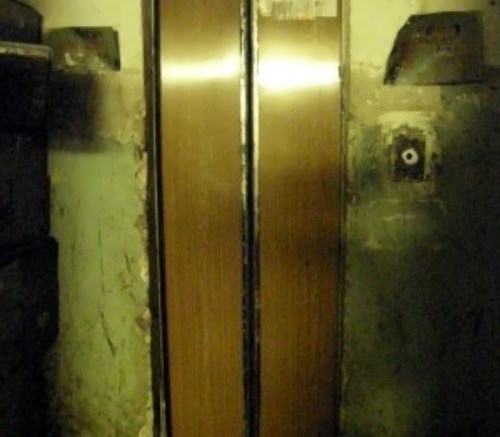 It was an old building with an old elevator — a very small elevator, which could carry only three people. Martin, a thin twelve-year-old, felt nervous in it from the first day he and his father moved into the apartment. Of course he was always uncomfortable in elevators, afraid that they would fall, but there was something especially unpleasant about this one. It had a baleful atmosphere. Perhaps this was because of the poor lighting and the dirty brown walls. Perhaps it was because of the door, which never stayed open long enough, and slammed shut with a loud noise. Perhaps it was the way the elevator shuddered each time it left a floor, as if it was exhausted. Maybe it was simply too small. It seemed crowded even with only two people in it.
Coming home from school the day after they moved in, Martin tried the stairs. But they were almost as bad, windowless, shadowy, with several dark landings where the lights were not working. His footsteps echoed behind him on the cement, as though there was another person climbing, getting closer. By the time he reached the seventeenth floor, which seemed to take forever, he was out of breath.