« The History of Britain
System of Government in GB » 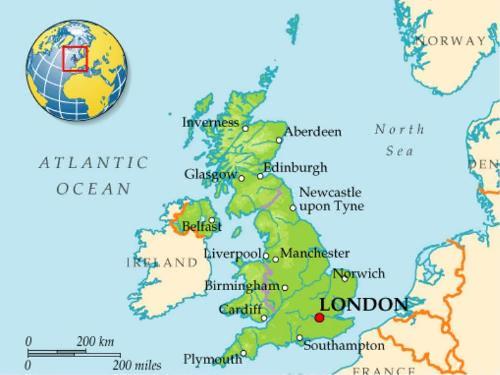 Location
Britain forms the greater part of the British Isles, which lie off the north-west coast of mainland Europe. Great Britain is separated from the Continent by the English Channel. «Great Britain» is a geographical expression but «The United Kingdom» is a political expression. The full name is the United Kingdom of Great Britain and Northern Ireland. Great Britain comprises England, Wales and Scotland.
Great Britain is in fact the biggest of the group of islands which lies between the North Sea and the Atlantic Ocean. The total area is 242,534 sq. km. Britain is just under 1,000 km long from the south coast of England to the extreme north of Scotland, and just under 500 km across in the widest part.

The population of the United Kingdom is 57 million people. The British Isles today are shared by two separate and independent states. The smaller of these is the Republic of Ireland, with its capital in Dublin. The larger, with London as its capital, is the United Kingdom of Great Britain and Northern Ireland. This long title is the result of a complicated history. The island of Great Britain contains three «nations» which were separated at earlier stages of their history: England, Scotland and Wales. Wales had become part of the English administrative system by the 16th century. Scotland was not completely united with England until 1707. The United Kingdom is a name which was introduced in 1801 when Great Britain became united with Ireland.

England
The largest and most densely populated part of the United Kingdom is England. The population of England is 47, 837 million people. England is washed by the North Sea, the Irish Sea, the English Channel and the Strait of Dover. The name «England» is derived from the Angles. Roman rule lasted for over 300 years from A. D. 43. The last invasion of England took place in 1066 when Duke William of Normandy defeated the English at the Battle of Hastings. At that time the English language was very much transformed.
The capital of England is London, which is the largest city in Britain. It is situated on the River Thames (the most important one). There are many rivers in England, the longest is the Severn. England is mostly a lowland country. Upland regions are in the north and the south-west. Northern England, Midland and South England — each part is different but very picturesque.
The English like to spend their holiday in Lake District, which is in the Northern England.
The main industries in England are the wool industry (with its centre in Leeds and Bradford), heavy machinery, shipbuilding, the cotton industry (the centre is Manchester).

Scotland
Scotland is the most northern part of the island of Great Britain. Its population is over 5 million people. Scotland was inhabited mainly by the Picts.
In the 6th century, the Scots from Ireland (or Scotia) settled in what is now Argyll, giving their name to the present-day Scotland. During the 9th century, the various parts of Scotland united in defence against the Vikings. The powerful monarchy which existed in England threatened Scottish independence throughout the Middle Ages. In 1603 James VI of Scotland became also James I of England when Queen Elizabeth I of England died without children. In 1651 Scotland was united with England, although Scotland kept its own parliament. In 1707, both countries, realizing the benefits of closer political and economic union, agreed on a single parliament for Great Britain.
The Cheviot Hills mark the boundary between England and Scotland. The greater part of Scotland is surrounded by sea. Scotland includes the Hebrides off the west coast and the Orkney and Shetland Islands off the north coast. It is bounded by the North Sea on the east.
Scotland is divided into three parts: the Highlands, the Lowlands and the Southern Uplands. The Highlands are among the oldest mountains in the world. There are a lot of valleys and lakes in this region, the best known lake is Loch Ness.
Most of the population of Scotland is concentrated in the Lowlands. The biggest city is Glasgow. It is an industrial city and an important port in the United Kingdom. Shipbuilding is the leading industry. But other industries such as iron and steel, engineering and coal-mining are highly developed too. The capital of Scotland is Edinburgh. It is the cultural centre of Scotland.

Wales
In 1301 after defeating the native princes of Wales, King Edward I of England named his son Prince of Wales. Since then the eldest son of the King or Queen of England has traditionally been given this title. In 1536 Wales was brought into the English system of national and local government by Act of Union.
Most of Britain was inhabited by Celts until the 4th century. Welsh and English are both official languages in Wales now.
The population of Wales is over 3 million people. About 75% of the people of Wales live in urban districts.
Wales is a highland country of old, hard rocks. North Wales is a country of mountains and deep valleys. South Wales is a land of high hills. The capital of Wales is Cardiff (an industrial city and a port). Cardiff is an administrative and educational centre. Such industries as coal-mining, steel production, electronics, electrical engineering are developed in this part of the country.
The Welsh are fond of folk music, singing and poetry. Welsh literature is one of the oldest in Europe.

Northern Ireland
A number of kingdoms had emerged in Ireland before the Christian era. Ireland didn’t escape the invasion of the Vikings, who dominated the country during the 10th century. In 1169 Henry II of England launched an invasion of Ireland. He had been granted its overlordship by the English Pope Adrian IV who wanted to bring the Irish church into full obedience to Rome.
The English Civil Wars (1642—1651) led to uprisings in Ireland which were crushed by Cromwell. During the 18th century various efforts were made by British Government to achieve stability. In 1800 an Act of Union between Great Britain and Ireland was signed.
The «Irish question» continued as one of the major problems of British politics during the 19th century. In 1985 the Anglo- Irish Agreement was signed in Belfast, the capital of Northern Ireland.
The population of Northern Ireland is about 1.5 million people. It occupies one sixth of the territory of the United Kingdom. 53% of the population live in urban areas. The largest industry is agriculture. The main industrial centre and a large port is Belfast.

The Weather
Britain is as far north as Canada’s Hudson Bay or Siberia. Edinburgh is 56 degrees north of the equator, the same latitude as Moscow, yet its climate is generally mild and temperature rarely exceeds 32°C or fall below 10°C. That’s because of the Gulf-stream which brings warm water and air across the Atlantic from the Gulf of Mexico. As a result snow falls occasionally and doesn’t remain for long (except in the Scottish mountains). Rainfall is well distributed throughout the year.
The wind brings rain from the Atlantic to the hills of the west. This means that the western parts of Britain are wetter than the eastern, which are sheltered.
London is much drier than the continental cities (e. g. Hamburg). Its weather may be unpredictable, but not too wet.

Exercises
I. Answer the questions.
1. When did Scotland and Wales start being governed from London?
2. Prince Charles is Prince of Wales. Where does this title come from?
3. What are the main industries in England?
4. What regions is Scotland divided into?
5. When was an Act of Union between Great Britain and Ireland signed?
6. What are the Welsh fond of?
7. Why is Britain warmer than other countries on the same latitude?
8. How can you explain that London is drier than continental cities?
9. Why is the south of Great Britain better suited to farming than the west or the north?

II. Explain the difference between these expressions:
Great Britain, the United Kingdom, the Republic of Ireland, the British Isles.