« Sport in Britain
Wine on the desert »

Traditions and Customs in Great Britain 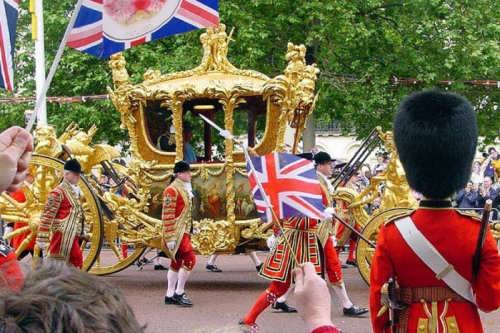 Every nation and every country has its own traditions. In Britain traditions play a more important part in the life of the people than in other countries.
The English are very proud of their traditions and carefully keep them. When you come to England you’re struck at once by quite a number of customs. Some ceremonies are rather formal, such as the Changing of the Guard at Buckingham Palace, Trooping the Colour, the State opening of Parliament, the Ceremony of the Keys. Sometimes you will see a group of cavalrymen riding on black horses through the streets of London. They wear red uniforms, shining helmets, long black boots and long white gloves. These men are Life Guards. Their special duty is to guard the King or the Queen of Great Britain, and very important guests of the country.

One of the most impressive and popular displays of royal pageantry is the Changing of the Guard, which takes place at Buckingham Palace every day including Sunday at 11.30. The troops who take part are selected from the five regiments of Foot Guards. Their numbers depend on whether the Queen is in residence or not. The men of the duty guard march from either Wellington or Chelsea Barracks to Buckingham Palace with a band.
The guard to be relieved forms at the south end of the forecourt under the command of the Captain of the Queen’s Guard. The New Guard enters the forecourt by the north gate. As it approaches, the Old Guard is called to attention. The New Guard is then halted to be formed into files before it advances to position at a slow march. While this is taking place, the band plays. Later the band leads the Old Guard back to their barracks.

The Ceremony of the Keys
Every night at 9.53 the Chief Warder of the yeomen warders (Beefeaters) of the Tower of London lights a candle lantern and then makes his way towards the Bloody Tower. In the Archway his Escort awaits his arrival. The Chief Warder, carrying the keys, moves off with his Escort to the West Gate, which he locks, while the Escort «presents arms». Then the Middle and Byward Towers are locked.
The party then returns to the Bloody Tower Archway, and there they are halted by the challenge of the sentry. «Halt», he commands. «Who goes there?» The Chief Warder answers, «The keys». The sentry demands, «Whose keys?» «Queen Elizabeth’s keys», replies the Chief Warder. «Advance Queen Elizabeth’s keys, all’s well», commands the sentry.
At 10 p. m. the Chief Warder proceeds to the Queen’s House, where the keys are given into the custody of the Resident Governor and Major.
The Ceremony of the Keys dates back 700 years and has taken place every night during that period. Only a limited number of visitors are admitted to the ceremony each night. Application to see it must be made at least forty-eight hours in advance at the Constable’s office in the Tower.
A new tradition has been born in Britain. Every year a large number of ancient motor cars drive from London to Brighton. Some of these cars look very funny. This run from London to Brighton is a colourful demonstration. People are dressed in the clothes of those times. It is not a race, and most of the cars come to Brighton (which is 60 miles from London) only in the evening.

EXERCISES
I. Answer the questions.
1. What are the English so proud of?
2. What formal ceremonies do you know?
3. What is the route of the duty guard?
4. How often does the Ceremony of the Keys take place?
5. Are tourists admitted to the Ceremony of the Keys?
6. What new tradition has been born in Britain?
7. How far is Brighton from London?

IV. Find the words and expressions that mean:
1. to be greatly surprised
2. to go along the streets
3. to close the door
4. to answer
5. old (cars)

a) of their traditions.
b) guard the Queen of Great Britain.
c) at Buckingham Palace.
d) the Bloody Tower.
e) red uniforms and shining helmets.
f) its customs and traditions.
g) «Whose keys?»
h) at least forty-eight hours in advance.
i) «Queen Elizabeth’s keys».
j) whether the Queen is in residence or not.
k) from London to Brighton.
l) funny.

VI. True or false?
1. The Changing of the Guard takes place every Sunday at 11.30.
2. The men of the duty guard march from Buckingham Palace to the Tower of London.
3. Every night the Chief Warder of the yeomen warders makes his way towards the Bloody Tower.
4. At 10 p. m. the keys are given into the custody of the Resident Governor and Major.
5. The Ceremony of the Keys dates back 700 years.
6. Every year a large number of motor cars take part in a race London — Brighton.